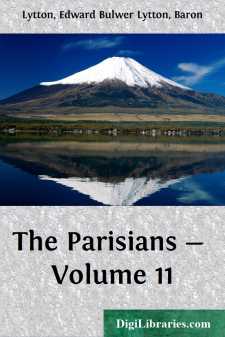 The streets swarmed with the populace troops as they passed to their destination. Among those of the Mobiles who especially caught the eye were two companies in which Enguerrand de Vandemar and Victor de Mauleon commanded. In the first were many young men of good family, or in the higher ranks of the bourgeoisie, known to numerous lookers-on; there was something inspiriting in their gay aspects, and in the easy carelessness of their march. Mixed with this company, however, and forming of course the bulk of it, were those who belonged to the lower classes of the population; and though they too might seem gay to an ordinary observer, the gaiety was forced. Many of them were evidently not quite sober; and there was a disorderly want of soldiership in their mien and armament which inspired distrust among such vieux moustaches as, too old for other service than that of the ramparts, mixed here and there among the crowd.

But when De Mauleon's company passed, the vieux moustaches impulsively touched each other. They recognised the march of well-drilled men; the countenances grave and severe, the eyes not looking on this side and that for admiration, the step regularly timed; and conspicuous among these men the tall stature and calm front of the leader.

"These fellows will fight well," growled a vieux moustache, "where did they fish out their leader?"

"Don't you know?" said a bourgeois_. "Victor de Mauleon. He won the cross in Algeria for bravery. I recollect him when I was very young; the very devil for women and fighting."

"I wish there were more such devils for fighting and fewer for women," growled again le vieux moustache.

One incessant roar of cannon all the night of the 29th. The populace had learned the names of the French cannons, and fancied they could distinguish the several sounds of their thunder. "There spits 'Josephine'!" shouts an invalid sailor. "There howls our own 'Populace'!" cries a Red Republican from Belleville.

[The "Populace" had been contributed to the artillery, sou d sou, by the working class.]

"There sings 'Le Chatiment'!" laughed Gustave Rameau, who was now become an enthusiastic admirer of the Victor Hugo he had before affected to despise. And all the while, mingled with the roar of the cannon, came, far and near from the streets, from the ramparts, the gusts of song—song sometimes heroic, sometimes obscene, more often carelessly joyous. The news of General Vinoy's success during the early part of the day had been damped by the evening report of Ducrot's delay in crossing the swollen Marne. But the spirits of the Parisians rallied from a momentary depression on the excitement at night of that concert of martial music.

During that night, close under the guns of the double redoubt of Gravelle and La Faisanderie, eight pontoon-bridges were thrown over the Marne; and at daybreak the first column of the third army under Blanchard and Renoult crossed with all their artillery, and, covered by the fire of the double redoubts, of the forts of Vincennes, Nogent, Rossuey, and the batteries of Mont Avron, had an hour before noon carried the village of Champingy, and the first echelon of the important plateau of Villiers, and were already commencing the work of intrenchment, when, rallying from the amaze of a defeat, the German forces burst upon them, sustained by fresh batteries....