The Paradise of Children (From: "A Wonder-Book for Girls and Boys") 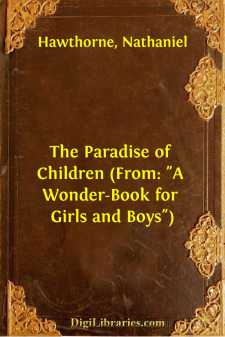 The golden days of October passed away, as so many other Octobers have, and brown November likewise, and the greater part of chill December, too. At last came merry Christmas, and Eustace Bright along with it, making it all the merrier by his presence. And, the day after his arrival from college, there came a mighty snow-storm. Up to this time, the winter had held back, and had given us a good many mild days, which were like smiles upon its wrinkled visage. The grass had kept itself green, in sheltered places, such as the nooks of southern hill-slopes, and along the lee of the stone fences. It was but a week or two ago, and since the beginning of the month, that the children had found a dandelion in bloom, on the margin of Shadow Brook, where it glides out of the dell.

But no more green grass and dandelions now. This was such a snow-storm! Twenty miles of it might have been visible at once, between the windows of Tanglewood and the dome of Taconic, had it been possible to see so far, among the eddying drifts that whitened all the atmosphere. It seemed as if the hills were giants, and were flinging monstrous handfuls of snow at one another, in their enormous sport. So thick were the fluttering snow-flakes, that even the trees, midway down the valley, were hidden by them the greater part of the time. Sometimes, it is true, the little prisoners of Tanglewood could discern a dim outline of Monument Mountain, and the smooth whiteness of the frozen lake at its base, and the black or gray tracts of woodland in the nearer landscape. But these were merely peeps through the tempest.

Nevertheless, the children rejoiced greatly in the snowstorm. They had already made acquaintance with it, by tumbling heels over head into its highest drifts, and flinging snow at one another, as we have just fancied the Berkshire mountains to be doing. And now they had come back to their spacious play-room, which was as big as the great drawing-room, and was lumbered with all sorts of playthings, large and small. The biggest was a rocking-horse, that looked like a real pony; and there was a whole family of wooden, waxen, plaster, and china dolls, besides rag-babies; and blocks enough to build Bunker Hill Monument, and nine-pins, and balls, and humming-tops, and battledores, and grace-sticks, and skipping-ropes, and more of such valuable property than I could tell of in a printed page. But the children liked the snow-storm better than them all. It suggested so many brisk enjoyments for to-morrow, and all the remainder of the winter. The sleigh-ride; the slides down hill into the valley; the snow-images that were to be shaped out; the snow-fortresses that were to be built; and the snow-balling to be carried on!

So the little folks blessed the snow-storm, and were glad to see it come thicker and thicker, and watched hopefully the long drift that was piling itself up in the avenue, and was already higher than any of their heads.

"Why, we shall be blocked up till spring!" cried they, with the hugest delight....