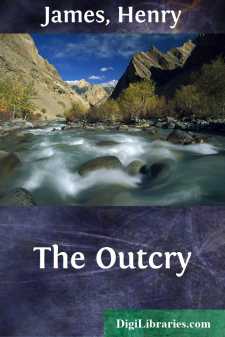 "NO, my lord," Banks had replied, "no stranger has yet arrived. But I'll see if any one has come in—or who has." As he spoke, however, he observed Lady Sandgate's approach to the hall by the entrance giving upon the great terrace, and addressed her on her passing the threshold. "Lord John, my lady." With which, his duty majestically performed, he retired to the quarter—that of the main access to the spacious centre of the house—from which he had ushered the visitor.

This personage, facing Lady Sandgate as she paused there a moment framed by the large doorway to the outer expanses, the small pinkish paper of a folded telegram in her hand, had partly before him, as an immediate effect, the high wide interior, still breathing the quiet air and the fair pannelled security of the couple of hushed and stored centuries, in which certain of the reputed treasures of Dedborough Place beautifully disposed themselves; and then, through ample apertures and beyond the stately stone outworks of the great seated and supported house—uplifting terrace, balanced, balustraded steps and containing basins where splash and spray were at rest—all the rich composed extension of garden and lawn and park. An ancient, an assured elegance seemed to reign; pictures and preserved "pieces," cabinets and tapestries, spoke, each for itself, of fine selection and high distinction; while the originals of the old portraits, in more or less deserved salience, hung over the happy scene as the sworn members of a great guild might have sat, on the beautiful April day, at one of their annual feasts.

Such was the setting confirmed by generous time, but the handsome woman of considerably more than forty whose entrance had all but coincided with that of Lord John either belonged, for the eye, to no such complacent company or enjoyed a relation to it in which the odd twists and turns of history must have been more frequent than any dull avenue or easy sequence. Lady Sandgate was shiningly modern, and perhaps at no point more so than by the effect of her express repudiation of a mundane future certain to be more and more offensive to women of real quality and of formed taste. Clearly, at any rate, in her hands, the clue to the antique confidence had lost itself, and repose, however founded, had given way to curiosity—that is to speculation—however disguised. She might have consented, or even attained, to being but gracefully stupid, but she would presumably have confessed, if put on her trial for restlessness or for intelligence, that she was, after all, almost clever enough to be vulgar. Unmistakably, moreover, she had still, with her fine stature, her disciplined figure, her cherished complexion, her bright important hair, her kind bold eyes and her large constant smile, the degree of beauty that might pretend to put every other question by.

Lord John addressed her as with a significant manner that he might have had—that of a lack of need, or even of interest, for any explanation about herself: it would have been clear that he was apt to discriminate with sharpness among possible claims on his attention. "I luckily find you at least, Lady Sandgate—they tell me Theign's off somewhere."

She replied as with the general habit, on her side, of bland reassurance; it mostly had easier consequences—for herself—than the perhaps more showy creation of alarm. "Only off in the park—open to-day for a school-feast from Dedborough, as you may have made out from the avenue; giving good advice, at the top of his lungs, to four hundred and fifty children."

It was such a scene, and such an aspect of the personage so accounted for, as Lord John could easily take in, and his recognition familiarly smiled....