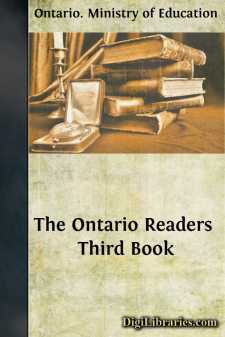 FORTUNE AND THE BEGGAR

One day a ragged beggar was creeping along from house to house. He carried an old wallet in his hand, and was asking at every door for a few cents to buy something to eat. As he was grumbling at his lot, he kept wondering why it was that folks who had so much money were never satisfied but were always wanting more.

"Here," said he, "is the master of this house—I know him well. He was always a good business man, and he made himself wondrously rich a long time ago. Had he been wise he would have stopped then. He would have turned over his business to some one else, and then he could have spent the rest of his life in ease. But what did he do instead? He built ships and sent them to sea to trade with foreign lands. He thought he would get mountains of gold.

"But there were great storms on the water; his ships were wrecked, and his riches were swallowed up by the waves. Now all his hopes lie at the bottom of the sea, and his great wealth has vanished.

"There are many such cases. Men seem to be never satisfied unless they gain the whole world.

"As for me, if I had only enough to eat and to wear, I would not want anything more."

Just at that moment Fortune came down the street. She saw the beggar and stopped. She said to him:

"Listen! I have long wished to help you. Hold your wallet and I will pour this gold into it, but only on this condition: all that falls into the wallet shall be pure gold; but every piece that falls upon the ground shall become dust. Do you understand?"

"Then have a care," said Fortune. "Your wallet is old, so do not load it too heavily."

The beggar was so glad that he could hardly wait. He quickly opened his wallet, and a stream of yellow dollars poured into it. The wallet grew heavy.

"Is that enough?" asked Fortune.

The beggar's hands began to tremble. Ah, if the golden stream would only pour for ever!

"You are the richest man in the world now!"

"Just a little more, add just a handful or two."

"There, it's full. The wallet will burst."

"But it will hold a little, just a little more!"

Another piece was added, and the wallet split. The treasure fell upon the ground and was turned to dust. Fortune had vanished. The beggar had now nothing but his empty wallet, and it was torn from top to bottom. He was as poor as before.

THE LARK AND THE ROOK "Good-night, Sir Rook!" said a little lark,"The daylight fades; it will soon be dark;I've bathed my wings in the sun's last ray;I've sung my hymn to the parting day;So now I haste to my quiet nookIn yon dewy meadow—good-night, Sir Rook!" "Good-night, poor Lark," said his titled friendWith a haughty toss and a distant bend;"I also go to my rest profound,But not to sleep on the cold, damp ground.The fittest place for a bird like meIs the topmost bough of yon tall pine tree. "I opened my eyes at peep of dayAnd saw you taking your upward way,Dreaming your fond romantic dreams,An ugly speck in the sun's bright beams,Soaring too high to be seen or heard;And I said to myself: 'What a foolish bird!' "I trod the park with a princely air;I filled my crop with the richest fare;I cawed all day 'mid a lordly crew,And I made more noise in the world than you!The sun shone forth on my ebon wing;I looked and wondered—good-night, poor thing!" "Good-night, once more," said the lark's sweet voice,"I see no cause to repent my choice;You build your nest in the lofty pine,But is your slumber more sweet than mine?You make more noise in the world than I,But whose is the sweeter minstrelsy?"

What stronger breast-plate than a heart untainted?Thrice is he armed, that hath his quarrel just;And he but naked, though locked up in steel,Whose conscience with injustice is corrupted.

THE PICKWICK CLUB ON THE ICE

"Oh, it is so graceful," said another young lady. A third young lady said it was elegant, and a fourth expressed her opinion that it was "swan-like."

"I should be very happy, I'm sure," said Mr. Winkle, reddening; "but I have no skates."

This objection was at once overruled. Trundle had got a couple of pair, and the fat boy announced that there were half a dozen more downstairs, whereat Mr. Winkle expressed exquisite delight, and looked exquisitely uncomfortable.

Old Wardle led the way to a pretty large sheet of ice; and the fat boy and Mr. Weller, having shovelled and swept away the snow which had fallen on it during the night, Mr. Bob Sawyer adjusted his skates with a dexterity which to Mr. Winkle seemed perfectly marvellous, and described circles with his left leg, and cut figures of eight, and inscribed upon the ice, without once stopping for breath, a great many other pleasant and astonishing devices, to the excessive satisfaction of Mr. Pickwick, Mr. Tupman, and the ladies; which reached a pitch of positive enthusiasm, when old Wardle and Benjamin Allen, assisted by the aforesaid Bob Sawyer, performed some mystic evolutions, which they called a reel.

All this time, Mr. Winkle, with his face and hands blue with the cold, had been forcing a gimlet into the soles of his feet, and putting his skates on with the points behind, and getting the straps into a very complicated and entangled state, with the assistance of Mr....