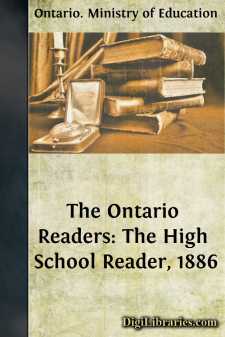 The selections in the High School Reader have been chosen with the belief that to pupils of such advancement as is required for entrance into High Schools and Collegiate Institutes, oral reading should be taught from the best literature, inasmuch as it not only affords a wide range of thought and sentiment, but it also demands for its appropriate vocal interpretation such powers of sympathy and appreciation as are developed only by culture; and it is to impart culture that these institutions of higher learning have been established.

Experience has shown that it is from their ordinary reading books that pupils obtain their chief practical acquaintance with literature, and the selections here presented have been made with this in remembrance. They have been taken from the writings of authors of acknowledged representative character; and they have been arranged for the most part chronologically, so that pupils may unconsciously obtain some little insight into the history of the development of the literary art. They have also been so chosen as to convey a somewhat fair idea of the relative value and productivity of authorship in the three great English-speaking communities of the world—the mother countries, our neighbours' country, and our own.

While a limited space, if nothing else, prevents the collection here made from being a complete anthology, yet it does pretend to represent the authors selected in characteristic moods, and (in so far as is possible in a school book, and a reading text-book) to present a somewhat fair perspective of the world of authorship. It may be said that, if this be so, some names are conspicuously absent: McGee, Canada's poet-orator; Parkman, who has given to our country a place in the portraiture of nations; William Morris, the chief of the modern school of romanticism; Tyndall, who of the literature of science has made an art; Lamb, daintiest of humorists; Collins, "whose range of flight," as Swinburne says, "was the highest of his generation." Either from lack of space, or from some inherent unsuitableness in such selections as might otherwise have been made, it was found impossible to represent these names worthily; but as they are all more or less adequately represented in the Fourth Reader, the teacher who may wish to correct the perspective here presented may refer his pupils to the pieces from these authors there given. It may be added, too, that the body of recent literature is so enormous, that no adequate representation of it (at any rate as regards quantity) is possible within the limits of one book.

The selections in poetry, with but three necessary exceptions, are complete wholes, and represent, as fairly as single pieces can, the respective merits and styles of their authors. The selections in prose cannot, of course, lay claim to this excellence; but they are all complete in themselves, or have been made so by short introductions; and it is hoped that they too are not unfairly representative of their authors....