The Olden Time Series, Vol. 1: Curiosities of the Old Lottery Gleanings Chiefly from Old Newspapers of Boston and Salem, Massachusetts 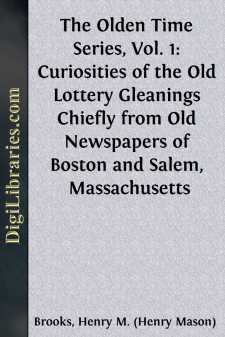 While this work does not pretend to be a history, it will yet present many historical facts. Its object is to show from old newspapers, which are not accessible to all, such items and comments upon a variety of subjects as might be supposed to amuse or instruct both old and young.

It is not the easy thing that many imagine to examine, read, and select from a vast number of newspapers such matter as is believed to be worth reproducing. Possibly to some it would seem to be a stupid and an uninteresting work. The Compiler, however, has found it a source of pleasure to make and arrange these selections; and the value of his work will be greatly enhanced if these volumes should prove of interest to any considerable number of persons.

There appears to be from year to year a growing taste among the most cultivated people for quaint and curious reminiscences of the Olden Time; and as these volumes will be of a handy size for the pocket or carpetbag, it is hoped that they will be welcomed by many who would not undertake to read a more pretentious or cumbersome work on similar topics.

CURIOSITIES OF THE OLD LOTTERY.

People of the present generation who look over files of old newspapers are filled with astonishment to see the great number of lotteries which are advertised, for many years, down to as late a period as the year 1826. The Faneuil Hall Lottery, the Harvard College Lottery, the Rhode Island College Lottery, the Massachusetts State Lottery, and lotteries for a bridge over the River Parker, for Marblehead, for the Williamstown Free-school, for Episcopal and Congregational Churches, were all advertised, with numerous other projects. A lottery was proposed for the purpose of finishing Bunker Hill Monument, although the scheme was not carried out. It is perhaps not generally remembered that this monument was at length completed by means furnished by a Ladies' Fair, in 1840, and handsome contributions by several individuals. Among other contributors was the celebrated danseuse Fanny Ellsler, who was at that time giving performances in Boston. Some of the best men in the community were interested in recommending the various schemes, and members of churches, men in high repute, bought and sold the tickets. In Salem, Mass., such well-known and esteemed citizens as John Jenks, Daniel Jenks, Thomas C. Cushing, of the "Gazette," John Dabney, the postmaster, Colonel John Russell, and the now venerable and respected Edward H. Payson—who, at the age of eighty, is still cashier of the First National (formerly the Commercial) Bank, to which office he was elected in 1826—sold tickets; so did Colonel John Hathorne. Colonel Henry Whipple, who is remembered as one of our best citizens, kept, in connection with his bookstore, a "Fortunate Lottery Office." Other names might be mentioned, but we think we have given enough to show the respectability of the calling. The better the man, the better the agent. Indeed, it was generally thought to be just as respectable to sell lottery-tickets as to sell Bibles; and we have seen them classed together in the same advertisement. Our observations have been confined chiefly to Boston and Salem prints, but we have no doubt that similar matter could be found in other papers. We propose now to give liberal extracts from some of the old advertisements of the different schemes, which will, we think, confirm what we have already said on the subject. Let us take first from the "Boston Gazette" of May 19, 1760, the lottery to raise $1,000 towards building a bridge over the River Parker, in Newbury. The managers were the first men in the place, and the tickets were sold by men of excellent standing in Boston.