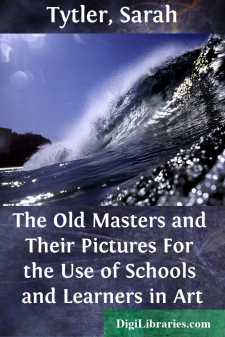 A pencil and paper, a box of colours, and a scrap-book, form so often a child's favourite toys that one might expect that a very large portion of men and women would prove painters. But, as we grow in years and knowledge, the discrepancy between nature and our attempts to copy nature, strike us more and more, until we turn in dissatisfaction and disgust from the vain effort.

There was only one old woman in an Esquimaux tribe who could be called forward to draw with a stick on the sand a sufficiently graphic likeness of the Erebus and the Terror. It is only a few groups of men belonging to different countries, throughout the centuries, who have been able to give us paintings to which we turn in wonder and admiration, and say that these are in their degree fair exponents of nature. The old painter's half-haughty, half-humble protest was true—it is 'God Almighty,' who in raising here and there men above their fellows, 'makes painters.'

But let us be thankful that the old propensity to delight in a facsimile, or in an idealized version of nature, survives in the very common satisfaction and joy—whether cultivated or uncultivated—- derived from looking at pictures, thinking over their details, striving to understand the meaning of the painters, and proceeding farther to consider the lives and times which throw light on works of genius. Music itself is not more universally and gladly listened and responded to, than pictures are looked at and remembered.

Thus I have no fear of failing to interest you, my readers, in my subject if I can only treat it sympathetically,—enter at a humble distance into the spirit of the painters and of their paintings, and place before you some of the paintings by reverent and loving word-painting such as others have achieved, and such as I may strive to attain to, that you may be in a sort early familiar with these paintings, before you see them in engravings and photographs, and on canvas and in fresco, as I trust you may be privileged to see many of them, when you may hail them not only for what they are, the glories of art, but for what they have been to you in thoughts of beauty and high desires.

Of the old Greek paintings, of which there are left isolated specimens dug up in Herculaneum and Pompeii, I cannot afford to say anything, and of the more modern Greek art which was spread over Europe after the fall of Constantinople I need only write a few words. While Greece was to Europe the birthplace of painting as of other arts, that Greek painting which illustrated early Christianity, was painting in its decline and decay, borrowing not only superstitious conventionalities, but barbaric attributes of gilding and blazoning to hide its infirmity and poverty. Virgins of the same weak and meaningless type, between attenuated saints or angels, and doll-like child-Christs in the one invariable attitude holding up two fingers of a baby hand to bless the spectator and worshippers, were for ever repeated. In a similar manner the instances of rude or meagre contemporary paintings with which the early Christians adorned their places of worship and the sepulchres of their dead in the basilicas and catacombs of Rome, are very curious and interesting for their antiquity and their associations, and as illustrations of faith; but they present no intrinsic beauty or worth....