The Nest in the Honeysuckles, and other Stories 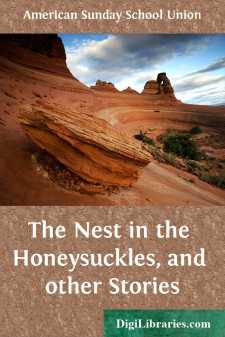 "Do come here, mother," said Eddie, carefully tip-toeing from the window, and beckoning with his hand. "Here is something I want to show you. Come carefully, or I am afraid you will frighten it."

Mrs. Dudley laid aside her book, and stepped cautiously forward, Eddie leading the way back to the window. "What is it?" she inquired.

"It is a bird with straw in its mouth, and I do believe it is going to build a nest."

Mrs. Dudley stood by her little boy a few minutes, looking from the window. Presently a robin alighted on the walnut tree, directly before them, with a bunch of dry grass in its mouth. It rested a few seconds, and then flew in among the branches of a honeysuckle which twined around the pillars, and crept over the top of the porch. A fine, warm place it was for a nest, sheltered from the north winds, and from the driving rains, and from the hot rays of the noon-day sun.

Eddie and his mother watched the bird for some time. It would bring straws, and arrange them in its nest, as only a bird can; and then it would away again, and come back, perhaps, with its bill covered and filled with mud, which it used for mortar in fastening the materials in their places. Then it would get in the nest, and, moving its feet and wings, would make it just the right shape to hold the pretty eggs she would lay in it, and the little robins she would love so well, and feed so carefully.

The robin was industrious, and worked hard to get the house finished in season. I think she must have been very tired when night came, and she flew away to her perch to rest till morning. I do not see how she could balance herself so nicely on one foot, as she slept with her head turned back, and half-hidden beneath her wing.

Eddie often watched the robin during the day. He was careful not to frighten it. "I wonder how the robin could find so nice a place. I should not have thought it would have known about it,"—he said to his mother, as he saw the bird fly in, almost out of sight, among the clustering branches.

Mrs. Dudley told Eddie God taught the birds where to build their nests, and that he took care of them, and provided food for them.

Is it not wonderful that God, who has built the world in which we live, and all the bright worlds we can see in the sky, should attend to the wants of the robins and sparrows, and other birds which he has made? We should forget them, if we had much of importance to attend to, or we should be weary of providing for their wants; but our heavenly Father never forgets, and never grows weary. He hears the ravens when they cry, and not even a sparrow falls to the ground without his knowledge. "Are ye not much better than they?" our Saviour said to his disciples, when endeavouring to teach them to trust in the love and parental care of God, and not to be anxious in regard to their temporal welfare.

If God so cares for the birds, whose lives are short, and who have no souls to live in another world, will he not much more care for those who are made in his image, and for whom the Saviour died?

No good thing will he withhold from those who walk uprightly, who try to obey his commandments, and look to Christ for salvation from sin. I hope, my dear children, when you see the birds, you will remember God's love to them and to you.

I have given you all I know of the history of one day of the robin's life, but Eddie will observe it while it lives in its house in the honeysuckle, and will tell me all he sees of its domestic arrangements. I hope to tell you with what kind of a carpet it covers the floor, and what it hangs on the walls, and how it brings up its little children, if it should be so happy as to have any to gladden its quiet home, and cheer it with their chattering tongues....