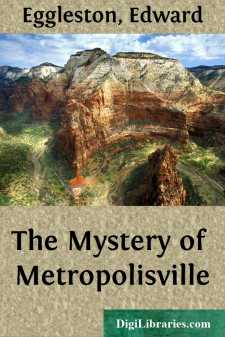 CHAPTER I. THE AUTOCRAT OF THE STAGECOACH.

No leader of a cavalry charge ever put more authority into his tones than did Whisky Jim, as he drew the lines over his four bay horses in the streets of Red Owl Landing, a village two years old, boasting three thousand inhabitants, and a certain prospect of having four thousand a month later.

Even ministers, poets, and writers of unworldly romances are sometimes influenced by mercenary considerations. But stage-drivers are entirely consecrated to their high calling. Here was Whisky Jim, in the very streets of Red Owl, in the spring of the year 1856, when money was worth five and six per cent a month on bond and mortgage, when corner lots doubled in value over night, when everybody was frantically trying to swindle everybody else—here was Whisky Jim, with the infatuation of a life-long devotion to horse-flesh, utterly oblivious to the chances of robbing green emigrants which a season of speculation affords. He was secure from the infection. You might have shown him a gold-mine under the very feet of his wheel-horses, and he could not have worked it twenty-four hours. He had an itching palm, which could be satisfied with nothing but the "ribbons" drawn over the backs of a four-in-hand.

The coach moved away—slowly at first—from the front door of the large, rectangular, unpainted Red Owl Hotel, dragging its wheels heavily through the soft turf of a Main street from which the cotton-wood trees had been cut down, but in which the stumps were still standing, and which remained as innocent of all pavement as when, three years before, the chief whose name it bore, loaded his worldly goods upon the back of his oldest and ugliest wife, slung his gun over his shoulder, and started mournfully away from the home of his fathers, which he, shiftless fellow, had bargained away to the white man for an annuity of powder and blankets, and a little money, to be quickly spent for whisky. And yet, I might add digressively, there is comfort in the saddest situations. Even the venerable Red Owl bidding adieu to the home of his ancestors found solace in the sweet hope of returning under favorable circumstances to scalp the white man's wife and children.

"Git up, thair! G'lang!" The long whip swung round and cracked threateningly over the haunches of the leaders, making them start suddenly as the coach went round a corner and dipped into a hole at the same instant, nearly throwing the driver, and the passenger who was enjoying the outride with him, from their seats.

"What a hole!" said the passenger, a studious-looking young man, with an entomologist's tin collecting-box slung over his shoulders.

The driver drew a long breath, moistened his lips, and said in a cool and aggravatingly deliberate fashion:

[Illustration: THE SUPERIOR BEING.]

"It's an awful price," said the abashed passenger, speaking as one might in the presence of a superior being....