The Modern Scottish Minstrel, Volumes I-VI. The Songs of Scotland of the Past Half Century 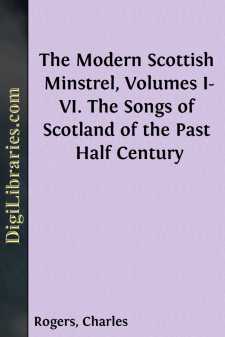 Scotland has probably produced a more patriotic and more extended minstrelsy than any other country in the world. Those Caledonian harp-strains, styled by Sir Walter Scott "gems of our own mountains," have frequently been gathered into caskets of national song, but have never been stored in any complete cabinet; while no attempt has been made, at least on an ample scale, to adapt, by means of suitable metrical translations, the minstrelsy of the Gaël for Lowland melody. The present work has been undertaken with the view of supplying these deficiencies, and with the further design of extending the fame of those cultivators of Scottish song—hitherto partially obscured by untoward circumstances, or on account of their own diffidence—and of affording a stimulus towards the future cultivation of national poetry.

The plan of the work is distinct from that of every previous collection of Scottish song—the more esteemed lyrical compositions of the various bards being printed along with the memoirs of the respective authors, while the names of the poets have been arranged in chronological order. Those have been considered as modern whose lives extend into the past half-century; and the whole of these have consequently been included in the work. Several Highland bards who died a short period before the commencement of the century have, however, been introduced. Of all the Scottish poets, whether lyrical or otherwise, who survived the period indicated, biographical sketches will be supplied in the course of the publication, together with memoirs of the principal modern collectors, composers and vocalists. The memoirs, so far as is practicable, will be prepared from original materials, of which the Editor, after a very extensive correspondence, has obtained a supply more ample and more interesting than, he flatters himself, has ever been attained by any collector of northern minstrelsy. The work will extend to six volumes, each of the subsequent volumes being accompanied by a dissertation on a distinct department of Scottish poetry and song. Each volume will be illustrated with two elegant engravings. In the course of the work, many original compositions will be presented, recovered from the MSS. of the deceased poets, or contributed by distinguished living bards.

For the department of the "Modern Gaelic Minstrelsy," the Editor has obtained the assistance of a learned friend, intimately familiar with the language and poetry of the Highlands. To this esteemed co-adjutor the reader is indebted for the revisal of the Gaelic department of this work, as well as for the following prefatory observations on the subject:—

"Among the intelligent natives of the Highlands, it is well known that the Gaelic language contains a quantity of poetry, which, how difficult soever to transfuse into other tongues and idioms, never fails to touch the heart, and excite enthusiastic feelings. The plan of 'The Modern Scottish Minstrel' restricts us to a period less favourable to the inspirations of the Celtic muse than remoter times. If it is asked, What could be gained by recurring to a more distant period? or what this unlettered people have really to shew for their bardic pretensions? we answer, that there is extant a large and genuine collection of Highland minstrelsy, ranging over a long exciting period, from the days of Harlaw to the expedition of Charles Edward. The 'Prosnachadh Catha,' or battle-song, that led on the raid of Donald the Islander on the Garioch, is still sung; the 'Woes of the Children of the Mist' are yet rehearsed in the ears of their children in the most plaintive measures. Innerlochy and Killiecrankie have their appropriate melodies; Glencoe has its dirge; both the exiled Jameses have their pæan and their lament; Charles Edward his welcome and his wail;—all in strains so varied, and with imagery so copious, that their repetition is continually called for, and their interest untiring.

"All that we have to offer belongs to recent times; but we cannot aver that the merit of the verses is inferior....