The Modern Scottish Minstrel, Volume V. The Songs of Scotland of the Past Half Century 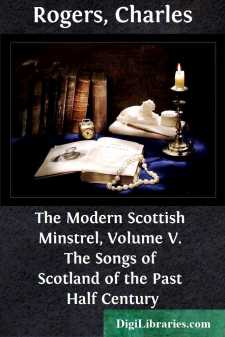 Judging from a comparison of extant remains, and other means of information now available, it may be doubted whether any country has equalled Scotland in the number of its lyrics. By the term lyrics, I mean specifically poetical compositions, meant and suitable to be sung, with the musical measures to which they have been wedded. I include under the term, both the compositions themselves, and their music. The Scottish ballads are numerous, the Scottish songs all but numberless, and the Scottish tunes an inexhaustible fountain of melody.

"And now 'twas like all instruments,Now like a lonely flute;And now it is an angel's song,That makes the heavens be mute."

Look at the vast collections of them which have been published, and the additions which are ever making, either from some newly-discovered manuscript, or from oral tradition in some out-of-the-way part of the country. The numbers, too, which have been preserved, seem to be exceeded by the numbers that have unfortunately been lost. Who has not in his ears the hum of many lyrics heard by him in his childhood—from mother, or nurse, or some old crooning dame at the fireside—which are to be found in no collection, and which are now to himself but like a distant, unformed sound? All our collectors, whilst smiling in triumph over the pearls which they have brought up and borne to the shore, lament the multitude of precious things irrecoverably buried in the depths of oblivion. Where, for instance, amid the similar wreck which has befallen so many others, are now the ancient words pouring forth the dirge over the "Flowers of the Forest," or those describing the tragic horrors on the "Braes of Yarrow," or those celebrating the wondrous attractions of the "Braw Lads o' Gala Water"? We have but the two first lines—the touching key-note of a lover's grief, in an old song, which has been most tamely rendered in Ramsay's version—these two lines being—

"Alas! that I came o'er the moor,And left my love behind me."

Only one verse has floated down of an old song, which breathes the very soul of a lover's restless longings:—

Does it not at once pique and disappoint the fancy, that these two graceful verses are all that remain of a song, where, doubtless, they were once but two fair blossoms in a large and variegated posy:—

"Within my garden gayThe rose and lily grew;But the pride of my garden is wither'd away,And it 's a' grown o'er wi' rue. "Farewell, ye fading flowers!And farewell, bonnie Jean!But the flower that is now trodden under foot,In time it may bloom again."

Nay—passing from the tender to the grotesque—would it not have been agreeable to hear something more than two lines from the lips of a lover so stout-hearted, yet so ardent, in his own rough, blunt way, as he who has thus commenced his song:—

"I wish my love were in a mire,That I might pull her out again;"

or to know something more of the details of that extraordinary parish, of which one surviving verse draws the following sombre picture:—

The Scottish lyrics, lying all about, thus countless and scattered—

are not like those which mark and adorn the literature of many other countries, the euphonisms of a meretricious court, or the rhymed musings of philosophers, or conceits from Pagan mythology, or the glancing epigrams of men of wit and of the world, or mere hunting choruses and Bacchanalian catches of a rude squirearchy....