The Modern Scottish Minstrel, Volume III The Songs of Scotland of the Past Half Century 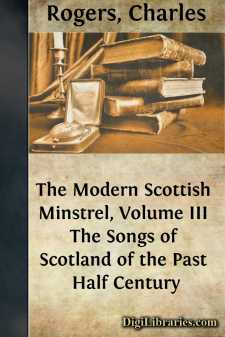 Men who compare themselves with their nearest neighbours are almost invariably conceited, speak boastingly of themselves, and disrespectfully of others. But if a man extend his survey, if he mingle largely with people whose feelings and opinions have been modified by quite different circumstances, the result is generally beneficial. The very act of accommodating his mind to foreign modes of thought expands his nature; and he becomes more liberal in his sentiments, more charitable in his construction of deeds, and more capable of perceiving real goodness under whatever shape it may present itself. So when a Scotsman criticises Scotch poetry viewed by itself alone, he is apt to be carried away by his patriotism,—he sees only the delightful side of the subject, and he ventures on assertions which flatter himself and his country at the expense of all other nations. If, however, we place the productions of our own country side by side with those of another, the excellences and the deficiencies of both are seen in stronger relief; the contrasts strike the mind, and the heart is widened by sympathising with goodness and beauty diversely conceived and diversely portrayed. For this reason, we shall attempt a brief comparison of Hellenic and Scottish songs.

Before we enter on our characterisation of these, we must glance at the materials which we have to survey. Greek lyric poetry arose about the beginning of the eighth century before the Christian era, and continued in full bloom down to the time when it passed into drama on the Athenian stage. The names of the poets are universally known, and have become, indeed, almost part of our poetic language. Every one speaks of an Anacreon, a Sappho, and a Pindar; and the names of Archilochus, Alcman, Alcæus, Stesichorus, Simonides, Ibycus, and Bacchylides, if not so often used, are yet familiar to most. Few of these lyrists belonged to Greece proper. They belonged to Greece only in the sense in which the Greeks themselves used the word, as including all the colonies which had gone forth from the motherland. Most of the early Greek song-writers dwelt in Asia Minor—some were born in the islands of the Cyclades, and some in Southern Italy; but all of them were proud of their Greek origin, all of them were thorough Greeks in their hearts. It is only the later bards who were born and brought up on the Greek mainland, and most of these lived to see the day when almost all the lyric poets took their grandest flights in the choral odes of their dramas. These odes, however, do not fall within the province of our comparison. The lyrical efforts both of Æschylus and Sophocles were inwoven with the structure of their plays, the chorus in Æschylus being generally one of the actors; and they have their modern representatives, not in the songs of the people, but in the arias of operas. Setting these aside, we have few genuine efforts of the Greek lyric muse belonging to the dramatic period—the most important being several songs sung by the Greeks at their banquets, which have fortunately been preserved. After this era, we have no lyric poems of the Greeks worth mentioning. The verse-writers took henceforth to epigrams—epigrams on everything on the face of the earth. These have been collected into the "Greek Anthology;" but the greater part of them are contemptible in a poetic point of view. They are interesting as throwing light on the times; but they are weak and vapid as expressions of the beatings of the human heart, and they are full of conceits. Besides these, there are the Anacreontic odes, known to all Greek scholars and to a great number of English, since they have been frequently translated. With one or two exceptions, they were all written between the third and twelfth centuries of the Christian era, though some scholars have boldly asserted that they were forgeries even of a later date. Most of them seem to be expansions of lines of Anacreon. They are in general neat, pretty, and gaysome, but tame and insincere. There is nothing like earnestness in them, nothing like genuine deep feeling; but thus they are all the more suited for a certain class of lovers and drinkers, who do not wish to be greatly moved by anything under the sun.

Scotch lyric poetry may be said to commence with the lyrics attributed to James I., or with those of Henryson....