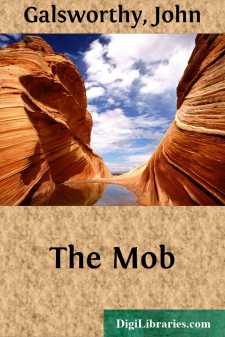 ACT I It is half-past nine of a July evening. In a dining-roomlighted by sconces, and apparelled in wall-paper, carpet, andcurtains of deep vivid blue, the large French windows betweentwo columns are open on to a wide terrace, beyond which are seentrees in darkness, and distant shapes of lighted houses. On oneside is a bay window, over which curtains are partly drawn.Opposite to this window is a door leading into the hall. At anoval rosewood table, set with silver, flowers, fruit, and wine,six people are seated after dinner. Back to the bay window isSTEPHEN MORE, the host, a man of forty, with a fine-cut face, arather charming smile, and the eyes of an idealist; to hisright, SIR, JOHN JULIAN, an old soldier, with thin brownfeatures, and grey moustaches; to SIR JOHN's right, his brother,the DEAN OF STOUR, a tall, dark, ascetic-looking Churchman: tohis right KATHERINE is leaning forward, her elbows on the table,and her chin on her hands, staring across at her husband; to herright sits EDWARD MENDIP, a pale man of forty-five, very bald,with a fine forehead, and on his clear-cut lips a smile thatshows his teeth; between him and MORE is HELEN JULIAN, a prettydark-haired young woman, absorbed in thoughts of her own. Thevoices are tuned to the pitch of heated discussion, as thecurtain rises.

THE DEAN. I disagree with you, Stephen; absolutely, entirely disagree.

MENDIP. Remember a certain war, Stephen! Were your chivalrous notions any good, then? And, what was winked at in an obscure young Member is anathema for an Under Secretary of State. You can't afford——

MENDIP. Idealism can be out of place, my friend.

THE DEAN. The Government is dealing here with a wild lawless race, on whom I must say I think sentiment is rather wasted.

MORE. God made them, Dean.

MENDIP. I have my doubts.

THE DEAN. They have proved themselves faithless. We have the right to chastise.

MORE. If I hit a little man in the eye, and he hits me back, have I the right to chastise him?

MORE. What! With our missionaries and our trading?

THE DEAN. It is news indeed that the work of civilization may be justifiably met by murder. Have you forgotten Glaive and Morlinson?

SIR JOHN. Yes. And that poor fellow Groome and his wife?

MORE. They went into a wild country, against the feeling of the tribes, on their own business. What has the nation to do with the mishaps of gamblers?

SIR JOHN. We can't stand by and see our own flesh and blood ill-treated!

THE DEAN. Does our rule bring blessing—or does it not, Stephen?

MORE. Sometimes; but with all my soul I deny the fantastic superstition that our rule can benefit a people like this, a nation of one race, as different from ourselves as dark from light—in colour, religion, every mortal thing. We can only pervert their natural instincts.

THE DEAN. That to me is an unintelligible point of view.

MENDIP. Go into that philosophy of yours a little deeper, Stephen— it spells stagnation....