The Miraculous Pitcher (From: "A Wonder-Book for Girls and Boys") 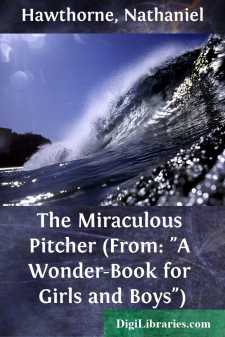 INTRODUCTORY TO "THE MIRACULOUS PITCHER"

And when, and where, do you think we find the children next? No longer in the winter-time, but in the merry month of May. No longer in Tanglewood play-room, or at Tanglewood fireside, but more than half-way up a monstrous hill, or a mountain, as perhaps it would be better pleased to have us call it. They had set out from home with the mighty purpose of climbing this high hill, even to the very tiptop of its bald head. To be sure, it was not quite so high as Chimborazo, or Mont Blanc, and was even a good deal lower than old Graylock. But, at any rate, it was higher than a thousand ant-hillocks, or a million of mole hills; and, when measured by the short strides of little children, might be reckoned a very respectable mountain.

And was Cousin Eustace with the party? Of that you may be certain; else how could the book go on a step further? He was now in the middle of the spring vacation, and looked pretty much as we saw him four or five months ago, except that, if you gazed quite closely at his upper lip, you could discern the funniest little bit of a mustache upon it. Setting aside this mark of mature manhood, you might have considered Cousin Eustace just as much a boy as when you first became acquainted with him. He was as merry, as playful, as good-humored, as light of foot and of spirits, and equally a favorite with the little folks, as he had always been. This expedition up the mountain was entirely of his contrivance. All the way up the steep ascent, he had encouraged the elder children with his cheerful voice; and when Dandelion, Cowslip, and Squash-blossom grew weary, he had lugged them along, alternately, on his back. In this manner, they had passed through the orchards and pastures on the lower part of the hill, and had reached the wood, which extends thence towards its bare summit.

The month of May, thus far, had been more amiable than it often is, and this was as sweet and genial a day as the heart of man or child could wish. In their progress up the hill, the small people had found enough of violets, blue and white, and some that were as golden as if they had the touch of Midas on them. That sociablest of flowers, the little Housatonia, was very abundant. It is a flower that never lives alone, but which loves its own kind, and is always fond of dwelling with a great many friends and relatives around it. Sometimes you see a family of them, covering a space no bigger than the palm of your hand; and sometimes a large community, whitening a whole tract of pasture, and all keeping one another in cheerful heart and life.

Within the verge of the wood there were columbines, looking more pale than red, because they were so modest, and had thought proper to seclude themselves too anxiously from the sun. There were wild geraniums, too, and a thousand white blossoms of the strawberry. The trailing arbutus was not yet quite out of bloom; but it hid its precious flowers under the last year's withered forest-leaves, as carefully as a mother-bird hides its little young ones....