The Meaning of the War Life & Matter in Conflict 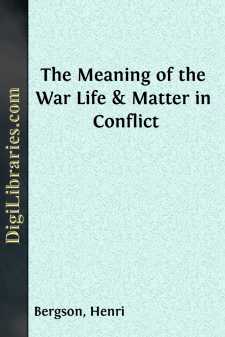 LIFE AND MATTER AT WAR

"Comprendre et ne pas s'indigner": this has been said to be the last word of philosophy. I believe none of it; and, had I to choose, I should much prefer, when in presence of crime, to give my indignation rein and not to understand. Happily, the choice has not to be made. On the contrary, there are forms of anger which, by a thorough comprehension of their objects, derive the force to sustain and renew their vigour. Our anger is of that kind. We have only to detach the inner meaning of this war, and our horror for those who made it will be increased. Moreover, nothing is easier. A little history, and a little philosophy, will suffice.

For a long period Germany devoted herself to poetry, to art, to metaphysic. She was made, so she said, for thought and imagination; "she had no feeling for the reality of things." It is true that her administration had defects, that she was divided into rival states, that anarchy at certain times seemed beyond remedy. Nevertheless, an attentive study would have revealed, beneath this disorder, the normal process of life, which is always too rank at the first and later on prunes away its excess, makes its choice and adopts a lasting form. From her municipal activity there would have issued at length a good administration which would have assured order without suppressing liberty. From the closer union of the confederated states that unity in diversity, which is the distinguishing mark of organized beings, would have arisen. But time was needed for that, as it always is needed by life, in order that its possibilities may be realized.

Now, while Germany was thus working out the task of her organic self-development there was within her, or rather by her side, a people with whom every process tended to take a mechanical form. Artificiality marked the creation of Prussia; for she was formed by clumsily sewing together, edge to edge, provinces either acquired or conquered. Her administration was mechanical; it did its work with the regularity of a well-appointed machine. Not less mechanical—extreme both in precision and in power—was the army, on which the attention of the Hohenzollerns was concentrated. Whether it was that the people had been drilled for centuries to mechanical obedience; or that an elemental instinct for conquest and plunder, absorbing to itself the life of the nation, had simplified its aims and reduced them to materialism; or that the Prussian character was originally so made—it is certain that the idea of Prussia always evoked a vision of rudeness, of rigidity, of automatism, as if everything within her went by clockwork, from the gesture of her kings to the step of her soldiers.

A day came when Germany had to choose between a rigid and ready-made system of unification, mechanically superposed from without, and the unity which comes from within by a natural effort of life. At the same time the choice was offered her between an administrative mechanism, into which she would merely have to fit herself—a complete order, doubtless, but poverty-stricken, like everything else that is artificial—and that richer and more flexible order which the wills of men, when freely associated, evolve of themselves....