The Matador of the Five Towns and Other Stories 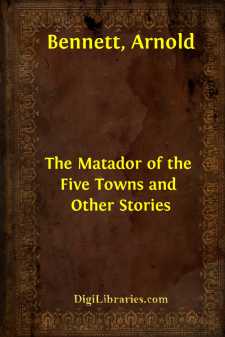 Mrs Brindeley looked across the lunch-table at her husband with glinting, eager eyes, which showed that there was something unusual in the brain behind them.

"It's only grandma's birthday to-day!"

My friend Robert Brindley, the architect, struck the table with a violent fist, making his little boys blink, and then he said quietly:

I gathered that grandmamma's birthday had been forgotten and that it was not a festival that could be neglected with impunity. Both Mr and Mrs Brindley had evidently a humorous appreciation of crises, contretemps, and those collisions of circumstances which are usually called "junctures" for short. I could have imagined either of them saying to the other: "Here's a funny thing! The house is on fire!" And then yielding to laughter as they ran for buckets. Mrs Brindley, in particular, laughed now; she gazed at the table-cloth and laughed almost silently to herself; though it appeared that their joint forgetfulness might result in temporary estrangement from a venerable ancestor who was also, birthdays being duly observed, a continual fount of rich presents in specie.

Robert Brindley drew a time-table from his breast-pocket with the rapid gesture of habit. All men of business in the Five Towns seem to carry that time-table in their breast-pockets. Then he examined his watch carefully.

"You'll have time to dress up your progeny and catch the 2.5. It makes the connection at Knype for Axe."

The two little boys, aged perhaps four and six, who had been ladling the messy contents of specially deep plates on to their bibs, dropped their spoons and began to babble about grea'-granny, and one of them insisted several times that he must wear his new gaiters.

"Yes," said Mrs Brindley to her husband, after reflection. "And a fine old crowd there'll be in the train—with this football match!"

"And what about you?" asked Mrs Brindley.

"You must tell the old lady I'm kept by business."

"I told her that last year, and you know what happened."

"Well," said Brindley. "Here Loring's just come. You don't expect me to leave him, do you? Or have you had the beautiful idea of taking him over to Axe to pass a pleasant Saturday afternoon with your esteemed grandmother?"

The boys, having first revolved on their axes, slid down from their high chairs as though from horses.

"I could stop in and read," I said, eyeing the multitudinous books on every wall of the dining-room. The house was dadoed throughout with books.

This was only my third visit to his home and to the Five Towns, but he and I had already become curiously intimate....