The Masters and their Music A series of illustrative programs with biographical, esthetical, and critical annotations 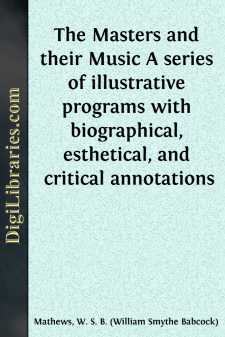 When a musical student begins to think of music as a literature and to inquire about individualities of style and musical expression, it is necessary for him to come as soon as possible to the fountainheads of this literature in the works of a few great masters who have set the pace and established the limits for all the rest. In the line of purely instrumental music this has been done by Bach, Haydn, Mozart, Beethoven, Mendelssohn, Schumann, Chopin, Liszt, and Wagner. The latter, who exercised a vast influence upon the manner of developing a musical thought and in the selection of the orchestral colors in which it can be expressed advantageously, powerfully stimulated all composers later than himself, nevertheless exerted this influence at second-hand, so to say, never having written purely instrumental movements, but merely dramatic accompaniments of one intensity or another. Hence, for our present purposes we may leave Wagner out altogether. Practically, down to about the year 1875, everything in instrumental music is original with the masters already mentioned, or was derived from them or suggested by them. Hence, in order to understand instrumental music we have, first of all, to make a beginning with the peculiarities, individualities, beauty, and mastership of these great writers. Such is the design of the following programs and explanatory matter.

My first intention has been to provide for the regular study of a musical club, in which the playing is to be contributed by active members designated in advance, the accessory explanations to be read from these pages. I have thought that the playing might be divided between several members, through which means the labor for each would be reduced, and, on the whole, an intimate familiarity with the music be more widely extended in the club. This method will have the disadvantage of leaving a part of every program less well interpreted than the others, whereby it will sometimes happen that valuable parts will not be properly appreciated. The advantages of this method, however, will outweigh the defects, since the awakening influence of a course of study of this character will greatly depend upon having as many members as possible practically interested in it.

While designed primarily for the use of a club, this course is equally well adapted to serve as a manual for individual study, in which case the individual himself will necessarily study every composition upon the list, and advance to a new program only after having completely mastered each and understood its relation to the remainder of the course. The only exception to this rule will be in the case where several programs of increasing difficulty are given. In this case the player should take the easiest; after mastering this, let him go on to the next most difficult, and, having succeeded with this, if possible let him attack the most difficult given. In case the latter should be impracticable for his technical resources, let him at least familiarize himself with the general features of all of the pieces mentioned, and get into their meaning and beauty as much as he can....