The Marriage of William Ashe 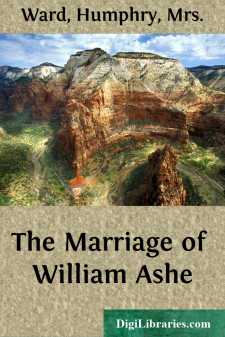 "He ought to be here," said Lady Tranmore, as she turned away from the window.

Mary Lyster laid down her work. It was a fine piece of church embroidery, which, seeing that it had been designed for her by no less a person than young Mr. Burne Jones himself, made her the envy of her pre-Raphaelite friends.

"Yes, indeed. You made out there was a train about twelve."

"Certainly. They can't have taken more than an hour to speechify after the declaration of the poll. And I know William meant to catch that train if he possibly could."

"And take his seat this evening?"

Lady Tranmore nodded. She moved restlessly about the room, fidgeting with a book here and there, and evidently full of thoughts. Mary Lyster watched her a little longer, then quietly took up her work again. Her air of well-bred sympathy, the measured ease of her movements, contrasted with Lady Tranmore's impatience. Yet in truth she was listening no less sharply than her companion to the sounds in the street outside.

Lady Tranmore made her way to the window, and stood there looking out on the park. It was the week before Easter, and the plane-trees were not yet in leaf. But a few thorns inside the park railings were already lavishly green and there was a glitter of spring flowers beside the park walks, not showing, however, in such glorious abundance as became the fashion a few years later. It was a mild afternoon and the drive was full of carriages. From the bow-window of the old irregular house in which she stood, Lady Tranmore could watch the throng passing and repassing, could see also the traffic in Park Lane on either side. London, from this point of sight, wore a cheerful, friendly air. The dim sunshine, the white-clouded sky, the touches of reviving green and flowers, the soft air blowing in from a farther window which was open, brought with them impressions of spring, of promise, and rebirth, which insensibly affected Lady Tranmore.

"Well, I wonder what William will do, this time, in Parliament!" she said, as she dropped again into her seat by the fire and began to cut the pages of a new book.

"He is sure to do extremely well," said Miss Lyster.

Lady Tranmore shrugged her shoulders. "My dear—do you know that William has been for eight years—since he left Trinity—one of the idlest young men alive?"

"Yes—somewhere in the country, where all the juniors get one in turn," said Lady Tranmore. "That was the year he was so keen and went on circuit, and never missed a sessions. Next year nothing would induce him to stir out of town. What has he done with himself all these eight years? I can't imagine."

"He has grown—uncommonly handsome," said Mary Lyster, with a momentary hesitation as she threaded her needle afresh.

"I never remember him anything else," said Lady Tranmore. "All the artists who came here and to Narroways wanted to paint him. I used to think it would make him a spoiled little ape. But nothing spoiled him."

Miss Lyster smiled. "You know, Cousin Elizabeth—and you may as well confess it at once!—that you think him the ablest, handsomest, and charmingest of men!"

"Of course I do," said Lady Tranmore, calmly. "I am certain, moreover—now—that he will be Prime Minister. And as for idleness, that, of course, is only a façon de parler. He has worked hard enough at the things which please him."

"Not politics, anyway," said the elder lady, reflectively. "He went into the House to please me, because I was a fool and wanted to see him there. But I must say when his constituents turned him out last year I thought they would have been a mean-spirited set if they hadn't. They knew very well he'd never done a stroke for them. Attendances—divisions—perfectly scandalous!"

"Well, here he is, in triumphantly for somewhere else—with all sorts of delightful prospects!"

Lady Tranmore sighed. Her white fingers paused in their task.

"That, of course, is because—now—he's a personage. Everything'll be made easy for him now. My dear Mary, they talk of England's being a democracy!"

The speaker raised her handsome shoulders; then, as though to shake off thoughts of loss and grief which had suddenly assailed her, she abruptly changed the subject.

"Well—work or no work—the first thing we've got to do is to marry him."

She looked up sharply. But not the smallest tremor could she detect in Mary Lyster's gently moving hand. There was, however, no reply to her remark.

Her smile—which still gave great beauty to her face—was charming, but a little sly, as she observed her companion.

"Why, of course," said Miss Lyster, inclining her head to one side that she might judge the effect of some green shades she had just put in. "But that surely will be made easy for him, too."

"Well, after all, the girls can't propose! And I never saw him take any interest in a girl yet—outside his own family, of course," added Lady Tranmore, hastily.

"No—he does certainly devote himself to the married women," replied Miss Lyster, in the half-absent tone of one more truly interested in her embroidery than in the conversation.

"He would sooner have an hour with Madame d'Estrées than a week with the prettiest miss in London. That's quite true, but I vow it's the girls' own fault! They should stand on their dignity—snub the creatures more! In my young days—"

"Yes," said Lady Tranmore, springing up. "There he is."

She stood waiting. The door flew open, and in came a tall young man.

"William, how late you are!" said Lady Tranmore, as she flew into his arms.

"Well, mother, are you pleased?"

Her son held her at arm's-length, smiling kindly upon her.

"Of course I am," said Lady Tranmore. "And you—are you horribly tired?"

Miss Lyster had risen, and the cousins shook hands.

"But I don't deny it's very jolly to come back—out of all that beastly scrimmage," said the new member, as he threw himself into an arm-chair by the fire with his hands behind his head, while Lady Tranmore prepared him a cup of tea.

"I expect you've enjoyed it," said Miss Lyster, also moving towards the fire.

"Well, when you're in it there's a certain excitement in wondering how you're going to come out of it! But one might say that, of course, of the infernal regions."

"Polly! you are a Tory. Everybody else's hell has moved—but yours! Thank you, mother," as Lady Tranmore gave him tea. Then, stretching out his great frame in lazy satisfaction, he turned his brown eyes from one lady to the other. "I say, mother, I haven't seen anything as good-looking as you—or Polly there, if she'll forgive me—for weeks."

"Hold your tongue, goose," said his mother, as she replenished the teapot. "What—there were no pretty girls—not one?"

"Well, they didn't come my way," said William, contentedly munching at bread-and-butter. "I have gone through all the usual humbug—and perjured my soul in all the usual ways—without any consolation worth speaking of."

"Don't talk nonsense, sir," said Lady Tranmore. "You know you like speaking—and you like compliments—and you've had plenty of both."

"Didn't I?" she said, smiling. He groaned, and took another piece of tea-cake.

"My own family at least, don't you think, might omit that?"

"H'm, sir—So you didn't believe a word of your own speeches?" said Lady Tranmore, as she stood behind him and smoothed his hair back from his forehead.

"Well, who does?" He looked up gayly and kissed the tips of her fingers.

"And it's in that spirit you're going back into the House?" Mary Lyster threw him the question—with a slight pinching of the lips—as she resumed her work.

"Spirit? What do you mean, Polly? One plays the game, of course—and it has its moments—its hot corners, so to speak—or I suppose no one would play it!"

"And the goal?" She lifted a gently disapproving face, in a movement which showed anew the large comeliness of head and neck.

"Why—to keep the other fellows out, of course!" He lifted an arm and drew his mother down to sit on the edge of his chair.

"William, you're not to talk like that," said Lady Tranmore, decidedly, laying her cheek, however, against his hand the while....