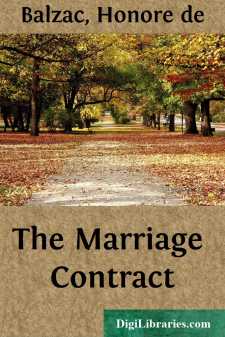 CHAPTER I. PRO AND CON

Monsieur de Manerville, the father, was a worthy Norman gentleman, well known to the Marechael de Richelieu, who married him to one of the richest heiresses of Bordeaux in the days when the old duke reigned in Guienne as governor. The Norman then sold the estate he owned in Bessin, and became a Gascon, allured by the beauty of the chateau de Lanstrac, a delightful residence owned by his wife. During the last days of the reign of Louis XV., he bought the post of major of the Gate Guards, and lived till 1813, having by great good luck escaped the dangers of the Revolution in the following manner.

Toward the close of the year, 1790, he went to Martinque, where his wife had interests, leaving the management of his property in Gascogne to an honest man, a notary's clerk, named Mathias, who was inclined to—or at any rate did—give into the new ideas. On his return the Comte de Manerville found his possessions intact and well-managed. This sound result was the fruit produced by grafting the Gascon on the Norman.

Madame de Manerville died in 1810. Having learned the importance of worldly goods through the dissipations of his youth, and, giving them, like many another old man, a higher place than they really hold in life, Monsieur de Manerville became increasingly economical, miserly, and sordid. Without reflecting that the avarice of parents prepares the way for the prodigalities of children, he allowed almost nothing to his son, although that son was an only child.

Paul de Manerville, coming home from the college of Vendome in 1810, lived under close paternal discipline for three years. The tyranny by which the old man of seventy oppressed his heir influenced, necessarily, a heart and a character which were not yet formed. Paul, the son, without lacking the physical courage which is vital in the air of Gascony, dared not struggle against his father, and consequently lost that faculty of resistance which begets moral courage. His thwarted feelings were driven to the depths of his heart, where they remained without expression; later, when he felt them to be out of harmony with the maxims of the world, he could only think rightly and act mistakenly. He was capable of fighting for a mere word or look, yet he trembled at the thought of dismissing a servant,—his timidity showing itself in those contests only which required a persistent will. Capable of doing great things to fly from persecution, he would never have prevented it by systematic opposition, nor have faced it with the steady employment of force of will. Timid in thought, bold in actions, he long preserved that inward simplicity which makes a man the dupe and the voluntary victim of things against which certain souls hesitate to revolt, preferring to endure them rather than complain. He was, in point of fact, imprisoned by his father's old mansion, for he had not enough money to consort with young men; he envied their pleasures while unable to share them.

The old gentleman took him every evening, in an old carriage drawn by ill-harnessed old horses, attended by ill-dressed old servants, to royalist houses, where he met a society composed of the relics of the parliamentary nobility and the martial nobility....