The Marble Faun - Volume 2 The Romance of Monte Beni 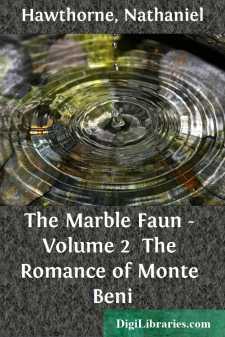 CHAPTER XXIV THE TOWER AMONG THE APENNINES

It was in June that the sculptor, Kenyon, arrived on horseback at the gate of an ancient country house (which, from some of its features, might almost be called a castle) situated in a part of Tuscany somewhat remote from the ordinary track of tourists. Thither we must now accompany him, and endeavor to make our story flow onward, like a streamlet, past a gray tower that rises on the hillside, overlooking a spacious valley, which is set in the grand framework of the Apennines.

The sculptor had left Rome with the retreating tide of foreign residents. For, as summer approaches, the Niobe of Nations is made to bewail anew, and doubtless with sincerity, the loss of that large part of her population which she derives from other lands, and on whom depends much of whatever remnant of prosperity she still enjoys. Rome, at this season, is pervaded and overhung with atmospheric terrors, and insulated within a charmed and deadly circle. The crowd of wandering tourists betake themselves to Switzerland, to the Rhine, or, from this central home of the world, to their native homes in England or America, which they are apt thenceforward to look upon as provincial, after once having yielded to the spell of the Eternal City. The artist, who contemplates an indefinite succession of winters in this home of art (though his first thought was merely to improve himself by a brief visit), goes forth, in the summer time, to sketch scenery and costume among the Tuscan hills, and pour, if he can, the purple air of Italy over his canvas. He studies the old schools of art in the mountain towns where they were born, and where they are still to be seen in the faded frescos of Giotto and Cimabue, on the walls of many a church, or in the dark chapels, in which the sacristan draws aside the veil from a treasured picture of Perugino. Thence, the happy painter goes to walk the long, bright galleries of Florence, or to steal glowing colors from the miraculous works, which he finds in a score of Venetian palaces. Such summers as these, spent amid whatever is exquisite in art, or wild and picturesque in nature, may not inadequately repay him for the chill neglect and disappointment through which he has probably languished, in his Roman winter. This sunny, shadowy, breezy, wandering life, in which he seeks for beauty as his treasure, and gathers for his winter's honey what is but a passing fragrance to all other men, is worth living for, come afterwards what may. Even if he die unrecognized, the artist has had his share of enjoyment and success.

Kenyon had seen, at a distance of many miles, the old villa or castle towards which his journey lay, looking from its height over a broad expanse of valley. As he drew nearer, however, it had been hidden among the inequalities of the hillside, until the winding road brought him almost to the iron gateway. The sculptor found this substantial barrier fastened with lock and bolt. There was no bell, nor other instrument of sound; and, after summoning the invisible garrison with his voice, instead of a trumpet, he had leisure to take a glance at the exterior of the fortress....