The Man of Destiny 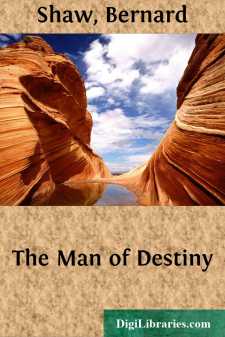 The twelfth of May, 1796, in north Italy, at Tavazzano, on the road from Lodi to Milan. The afternoon sun is blazing serenely over the plains of Lombardy, treating the Alps with respect and the anthills with indulgence, not incommoded by the basking of the swine and oxen in the villages nor hurt by its cool reception in the churches, but fiercely disdainful of two hordes of mischievous insects which are the French and Austrian armies. Two days before, at Lodi, the Austrians tried to prevent the French from crossing the river by the narrow bridge there; but the French, commanded by a general aged 27, Napoleon Bonaparte, who does not understand the art of war, rushed the fireswept bridge, supported by a tremendous cannonade in which the young general assisted with his own hands. Cannonading is his technical specialty; he has been trained in the artillery under the old regime, and made perfect in the military arts of shirking his duties, swindling the paymaster over travelling expenses, and dignifying war with the noise and smoke of cannon, as depicted in all military portraits. He is, however, an original observer, and has perceived, for the first time since the invention of gunpowder, that a cannon ball, if it strikes a man, will kill him. To a thorough grasp of this remarkable discovery, he adds a highly evolved faculty for physical geography and for the calculation of times and distances. He has prodigious powers of work, and a clear, realistic knowledge of human nature in public affairs, having seen it exhaustively tested in that department during the French Revolution. He is imaginative without illusions, and creative without religion, loyalty, patriotism or any of the common ideals. Not that he is incapable of these ideals: on the contrary, he has swallowed them all in his boyhood, and now, having a keen dramatic faculty, is extremely clever at playing upon them by the arts of the actor and stage manager. Withal, he is no spoiled child. Poverty, ill-luck, the shifts of impecunious shabby-gentility, repeated failure as a would-be author, humiliation as a rebuffed time server, reproof and punishment as an incompetent and dishonest officer, an escape from dismissal from the service so narrow that if the emigration of the nobles had not raised the value of even the most rascally lieutenant to the famine price of a general he would have been swept contemptuously from the army: these trials have ground the conceit out of him, and forced him to be self-sufficient and to understand that to such men as he is the world will give nothing that he cannot take from it by force. In this the world is not free from cowardice and folly; for Napoleon, as a merciless cannonader of political rubbish, is making himself useful. indeed, it is even now impossible to live in England without sometimes feeling how much that country lost in not being conquered by him as well as by Julius Caesar.

However, on this May afternoon in 1796, it is early days with him. He is only 26, and has but recently become a general, partly by using his wife to seduce the Directory (then governing France) partly by the scarcity of officers caused by the emigration as aforesaid; partly by his faculty of knowing a country, with all its roads, rivers, hills and valleys, as he knows the palm of his hand; and largely by that new faith of his in the efficacy of firing cannons at people. His army is, as to discipline, in a state which has so greatly shocked some modern writers before whom the following story has been enacted, that they, impressed with the later glory of "L'Empereur," have altogether refused to credit it. But Napoleon is not "L'Empereur" yet: he has only just been dubbed "Le Petit Caporal," and is in the stage of gaining influence over his men by displays of pluck. He is not in a position to force his will on them, in orthodox military fashion, by the cat o' nine tails. The French Revolution, which has escaped suppression solely through the monarchy's habit of being at least four years in arrear with its soldiers in the matter of pay, has substituted for that habit, as far as possible, the habit of not paying at all, except in promises and patriotic flatteries which are not compatible with martial law of the Prussian type. Napoleon has therefore approached the Alps in command of men without money, in rags, and consequently indisposed to stand much discipline, especially from upstart generals. This circumstance, which would have embarrassed an idealist soldier, has been worth a thousand cannon to Napoleon. He has said to his army, "You have patriotism and courage; but you have no money, no clothes, and deplorably indifferent food. In Italy there are all these things, and glory as well, to be gained by a devoted army led by a general who regards loot as the natural right of the soldier. I am such a general. En avant, mes enfants!" The result has entirely justified him. The army conquers Italy as the locusts conquered Cyprus. They fight all day and march all night, covering impossible distances and appearing in incredible places, not because every soldier carries a field marshal's baton in his knapsack, but because he hopes to carry at least half a dozen silver forks there next day.

It must be understood, by the way, that the French army does not make war on the Italians. It is there to rescue them from the tyranny of their Austrian conquerors, and confer republican institutions on them; so that in incidentally looting them, it merely makes free with the property of its friends, who ought to be grateful to it, and perhaps would be if ingratitude were not the proverbial failing of their country. The Austrians, whom it fights, are a thoroughly respectable regular army, well disciplined, commanded by gentlemen trained and versed in the art of war: at the head of them Beaulieu, practising the classic art of war under orders from Vienna, and getting horribly beaten by Napoleon, who acts on his own responsibility in defiance of professional precedents or orders from Paris....