The Man of Adamant (From: "The Snow Image and Other Twice-Told Tales") 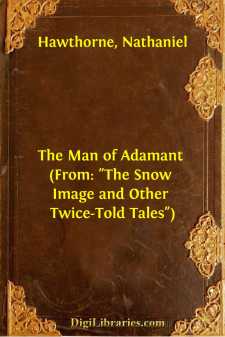 In the old times of religious gloom and intolerance lived Richard Digby, the gloomiest and most intolerant of a stern brotherhood. His plan of salvation was so narrow, that, like a plank in a tempestuous sea, it could avail no sinner but himself, who bestrode it triumphantly, and hurled anathemas against the wretches whom he saw struggling with the billows of eternal death. In his view of the matter, it was a most abominable crime—as, indeed, it is a great folly—for men to trust to their own strength, or even to grapple to any other fragment of the wreck, save this narrow plank, which, moreover, he took special care to keep out of their reach. In other words, as his creed was like no man's else, and being well pleased that Providence had intrusted him alone, of mortals, with the treasure of a true faith, Richard Digby determined to seclude himself to the sole and constant enjoyment of his happy fortune.

"And verily," thought he, "I deem it a chief condition of Heaven's mercy to myself, that I hold no communion with those abominable myriads which it hath cast off to perish. Peradventure, were I to tarry longer in the tents of Kedar, the gracious boon would be revoked, and I also be swallowed up in the deluge of wrath, or consumed in the storm of fire and brimstone, or involved in whatever new kind of ruin is ordained for the horrible perversity of this generation."

So Richard Digby took an axe, to hew space enough for a tabernacle in the wilderness, and some few other necessaries, especially a sword and gun, to smite and slay any intruder upon his hallowed seclusion; and plunged into the dreariest depths of the forest. On its verge, however, he paused a moment, to shake off the dust of his feet against the village where he had dwelt, and to invoke a curse on the meeting-house, which he regarded as a temple of heathen idolatry. He felt a curiosity, also, to see whether the fire and brimstone would not rush down from Heaven at once, now that the one righteous man had provided for his own safety. But, as the sunshine continued to fall peacefully on the cottages and fields, and the husbandmen labored and children played, and as there were many tokens of present happiness, and nothing ominous of a speedy judgment, he turned away, somewhat disappointed. The farther he went, however, and the lonelier he felt himself, and the thicker the trees stood along his path, and the darker the shadow overhead, so much the more did Richard Digby exult. He talked to himself, as he strode onward; he read his Bible to himself, as he sat beneath the trees; and, as the gloom of the forest hid the blessed sky, I had almost added, that, at morning, noon, and eventide, he prayed to himself. So congenial was this mode of life to his disposition, that he often laughed to himself, but was displeased when an echo tossed him back the long loud roar.

In this manner, he journeyed onward three days and two nights, and came, on the third evening, to the mouth of a cave, which, at first sight, reminded him of Elijah's cave at Horeb, though perhaps it more resembled Abraham's sepulchral cave at Machpelah. It entered into the heart of a rocky hill. There was so dense a veil of tangled foliage about it, that none but a sworn lover of gloomy recesses would have discovered the low arch of its entrance, or have dared to step within its vaulted chamber, where the burning eyes of a panther might encounter him. If Nature meant this remote and dismal cavern for the use of man, it could only be to bury in its gloom the victims of a pestilence, and then to block up its mouth with stones, and avoid the spot forever after. There was nothing bright nor cheerful near it, except a bubbling fountain, some twenty paces off, at which Richard Digby hardly threw away a glance. But he thrust his head into the cave, shivered, and congratulated himself.

"The finger of Providence hath pointed my way!" cried he, aloud, while the tomb-like den returned a strange echo, as if some one within were mocking him....