The Man from Glengarry; a tale of the Ottawa 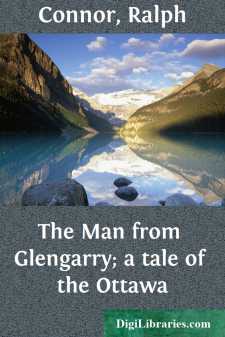 CHAPTER I THE OPEN RIVER

The winter had broken early and the Scotch River was running ice-free and full from bank to bank. There was still snow in the woods, and with good sleighing and open rivers every day was golden to the lumbermen who had stuff to get down to the big water. A day gained now might save weeks at a chute farther down, where the rafts would crowd one another and strive for right of way.

Dan Murphy was mightily pleased with himself and with the bit of the world about him, for there lay his winter's cut of logs in the river below him snug and secure and held tight by a boom across the mouth, just where it flowed into the Nation. In a few days he would have his crib made, and his outfit ready to start for the Ottawa mills. He was sure to be ahead of the big timber rafts that took up so much space, and whose crews with unbearable effrontery considered themselves the aristocrats of the river.

Yes, it was a pleasant and satisfying sight, some three solid miles of logs boomed at the head of the big water. Suddenly Murphy turned his face up the river.

LeNoir, or "LeNware," as they all called it in that country, was Dan Murphy's foreman, and as he himself said, "for haxe, for hit (eat), for fight de boss on de reever Hottawa! by Gar!" Louis LeNoir was a French-Canadian, handsome, active, hardy, and powerfully built. He had come from the New Brunswick woods some three years ago, and had wrought and fought his way, as he thought, against all rivals to the proud position of "boss on de reever," the topmost pinnacle of a lumberman's ambition. It was something to see LeNoir "run a log" across the river and back; that is, he would balance himself upon a floating log, and by spinning it round, would send it whither he would. At Murphy's question LeNoir stood listening with bent head and open mouth. Down the river came the sound of singing. "Don-no me! Ah oui! be dam! Das Macdonald gang for sure! De men from Glengarrie, les diables! Dey not hout de reever yet." His boss went off into a volley of oaths—

"They'll be wanting the river now, an' they're divils to fight."

"We give em de full belly, heh? Bon!" said LeNoir, throwing back his head. His only unconquered rival on the river was the boss of the Macdonald gang.

Down the river came the strong, clear chorus of men's voices, and soon a "pointer" pulled by six stalwart men with a lad in the stern swung round the bend into view. A single voice took up the song—

After the verse the full chorus broke forth again—

Swiftly the pointer shot down the current, the swaying bodies and swinging oars in perfect rhythm with the song that rose and fell with melancholy but musical cadence. The men on the high bank stood looking down upon the approaching singers....