The Maidens' Lodge None of Self and All of Thee, (In the Reign of Queen Anne) 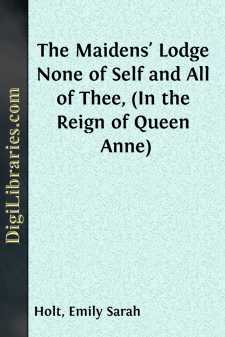 “The sailing of a cloud hath Providence to its pilot.” Martin Farquhar Tupper.

In the handsome parlour of Cressingham Abbey, commonly called White-Ladies, on a dull afternoon in January, 1712, sat Madam and her granddaughter, Rhoda, sipping tea.

Madam—and nothing else, her dependants would have thought it an impertinence to call her Mrs Furnival. Never was Empress of all the Russias more despotic in her wide domain than Madam in her narrow one.

As to Mr Furnival—for there had been such a person, though it was a good while since—he was a mere appendage to Madam’s greatness—useful in the way of collecting rents and seeing to repairs, and capable of being put away when done with. He was a little, meek, unobtrusive man, fully (and happily) convinced of his own insignificance, and ready to sink himself in his superb wife as he might receive orders. He had been required to change his name as a condition of alliance with the heiress of Cressingham, and had done so with as much readiness as he would in similar circumstances have changed his coat. It was about fourteen years since this humble individual had ceased to be the head servant of Madam; and it was Madam’s wont to hint, when she condescended to refer to him at all, that her marriage with him had been the one occasion in her life wherein she had failed to act with her usual infallibility.

It had been a supreme disappointment to Madam that both her children were of the inferior sex. Mrs Catherine to some extent resembled her father, having no thoughts nor opinions of her own, but being capable of moulding like wax; and like wax her mother moulded her. She married, under Madam’s orders, at the age of twenty, the heir of the neighbouring estate—a young gentleman of blood and fortune, with few brains and fewer principles—and died two years thereafter, leaving behind her a baby daughter only a week old, whom her careless father was glad enough to resign to Madam, in order to get her out of his way.

The younger of Madam’s daughters, despite her sister’s passive obedience, had been the mother’s favourite. Her obedience was by no means passive. She inherited all her mother’s self-will, and more than her mother’s impulsiveness. Much the handsomer of the two, she was dressed up, flattered, indulged, and petted in every way. Nothing was too good for Anne, until one winter day, shortly after Catherine’s marriage, when the family assembled round the breakfast table, and Anne was found missing. A note was brought to Madam that evening by one of Mr Peveril’s under-gardeners, in which Anne gaily confessed that she had taken her destiny into her own hands, and had that morning been married to the Reverend Charles Latrobe, family chaplain to her brother-in-law, Mr Peveril. She hoped that her mother would not be annoyed, and would receive her and her bridegroom with the usual cordiality exhibited at weddings.

Madam’s, face was a study for a painter. Had Anne Furnival searched through her whole acquaintance, and selected that one man who would be least acceptable at Cressingham, she could not have succeeded better....