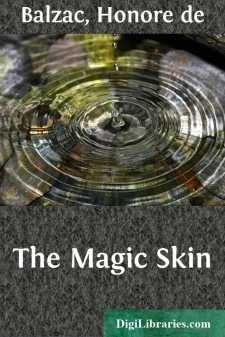 Towards the end of the month of October 1829 a young man entered the Palais-Royal just as the gaming-houses opened, agreeably to the law which protects a passion by its very nature easily excisable. He mounted the staircase of one of the gambling hells distinguished by the number 36, without too much deliberation.

"Your hat, sir, if you please?" a thin, querulous voice called out. A little old man, crouching in the darkness behind a railing, suddenly rose and exhibited his features, carved after a mean design.

As you enter a gaming-house the law despoils you of your hat at the outset. Is it by way of a parable, a divine revelation? Or by exacting some pledge or other, is not an infernal compact implied? Is it done to compel you to preserve a respectful demeanor towards those who are about to gain money of you? Or must the detective, who squats in our social sewers, know the name of your hatter, or your own, if you happen to have written it on the lining inside? Or, after all, is the measurement of your skull required for the compilation of statistics as to the cerebral capacity of gamblers? The executive is absolutely silent on this point. But be sure of this, that though you have scarcely taken a step towards the tables, your hat no more belongs to you now than you belong to yourself. Play possesses you, your fortune, your cap, your cane, your cloak.

As you go out, it will be made clear to you, by a savage irony, that Play has yet spared you something, since your property is returned. For all that, if you bring a new hat with you, you will have to pay for the knowledge that a special costume is needed for a gambler.

The evident astonishment with which the young man took a numbered tally in exchange for his hat, which was fortunately somewhat rubbed at the brim, showed clearly enough that his mind was yet untainted; and the little old man, who had wallowed from his youth up in the furious pleasures of a gambler's life, cast a dull, indifferent glance over him, in which a philosopher might have seen wretchedness lying in the hospital, the vagrant lives of ruined folk, inquests on numberless suicides, life-long penal servitude and transportations to Guazacoalco.

His pallid, lengthy visage appeared like a haggard embodiment of the passion reduced to its simplest terms. There were traces of past anguish in its wrinkles. He supported life on the glutinous soups at Darcet's, and gambled away his meagre earnings day by day. Like some old hackney which takes no heed of the strokes of the whip, nothing could move him now. The stifled groans of ruined players, as they passed out, their mute imprecations, their stupefied faces, found him impassive. He was the spirit of Play incarnate. If the young man had noticed this sorry Cerberus, perhaps he would have said, "There is only a pack of cards in that heart of his."

The stranger did not heed this warning writ in flesh and blood, put here, no doubt, by Providence, who has set loathing on the threshold of all evil haunts....