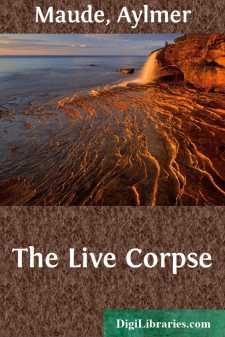 Protásov's flat in Moscow. The scene represents a small dining-room.

Anna Pávlovna, a stout grey-haired lady, tightly laced, is sitting alone at the tea-table on which is a samovár. Enter nurse, carrying a teapot.

NURSE. May I have a little hot water, ma'am?

NURSE. He's restless.… There's nothing worse than for a lady to nurse her baby herself! She has her troubles, and the child must suffer. What can her milk be like, when she lies awake crying all night?

NURSE. Quiet, indeed! It makes one ill to see her. She's been writing something, and crying.

SÁSHA [to Nurse] Lisa is looking for you.

ANNA PÁVLOVNA. Nurse says she keeps on crying.… Why can't she control herself?

SÁSHA. Well really, mother, you are amazing!… A woman has left her husband, her child's father, and you expect her to be calm!

ANNA PÁVLOVNA. Well, not calm … But what's done is done! If I, her mother, not only allowed my daughter to leave her husband, but am even glad she has done it, that shows he deserved it. One ought to rejoice, not to grieve, at the chance of freeing oneself from such a bad man!

SÁSHA. Mother, why say such things? You know it's not true! He's not bad—but on the contrary, he's a wonderful man, in spite of his weaknesses.

ANNA PÁVLOVNA. Yes indeed, a “wonderful” man—as soon as he has money in his pocket—his own or other people's.…

SÁSHA. Mother! He has never taken other people's!

SÁSHA. But he gave all his property to his wife!

ANNA PÁVLOVNA. Of course, when he knew that otherwise he was sure to squander it all!

SÁSHA. Squander or not, I only know that a wife must not separate from her husband, especially from such a one as Fédya.

ANNA PÁVLOVNA. Then, in your opinion she ought to wait till he has squandered everything, and brought his gipsy mistresses into the house?

SÁSHA. He has no mistresses!

ANNA PÁVLOVNA. That's the misfortune—he seems to have bewitched you all! But not me—no! He won't come over me! I see through him, and he knows it. Had I been in Lisa's place I should have left him a year ago.

SÁSHA. How lightly you say it!

ANNA PÁVLOVNA. Not lightly at all. It's not a light thing for me, as a mother, to see my daughter divorced. Believe me it's not! But yet it is better than ruining a young life.… No, I'm thankful to God that she has at last made up her mind, and that it is all over.

SÁSHA. Perhaps it's not all over!

ANNA PÁVLOVNA. Oh! If he only consents to a divorce.…

SÁSHA. What good will that do?

ANNA PÁVLOVNA. This good; that she is young, and may again be happy.

SÁSHA. Oh mother! It's dreadful to hear you speak so! Lisa can't love another.

ANNA PÁVLOVNA. Why not, when she's free? Many a man a thousand times better than your Fédya might turn up who would be only too happy to marry Lisa.