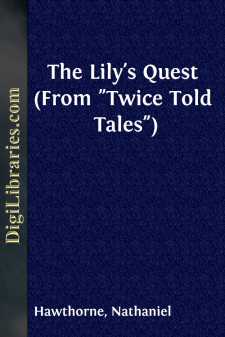 Two lovers, once upon a time, had planned a little summer-house, in the form of an antique temple, which it was their purpose to consecrate to all manner of refined and innocent enjoyments. There they would hold pleasant intercourse with one another, and the circle of their familiar friends; there they would give festivals of delicious fruit; there they would hear lightsome music, intermingled with the strains of pathos which make joy more sweet; there they would read poetry and fiction, and permit their own minds to flit away in daydreams and romance; there, in short,—for why should we shape out the vague sunshine of their hopes?—there all pure delights were to cluster like roses among the pillars of the edifice, and blossom ever new and spontaneously. So, one breezy and cloudless afternoon, Adam Forrester and Lilias Fay set out upon a ramble over the wide estate which they were to possess together, seeking a proper site for their Temple of Happiness. They were themselves a fair and happy spectacle, fit priest and priestess for such a shrine; although, making poetry of the pretty name of Lilias, Adam Forrester was wont to call her LILY, because her form was as fragile, and her cheek almost as pale.

As they passed, hand in hand, down the avenue of drooping elms, that led from the portal of Lilies Fay's paternal mansion, they seemed to glance like winged creatures through the strips of sunshine, and to scatter brightness where the deep shadows fell. But, setting forth at the same time with this youthful pair, there was a dismal figure, wrapped in a black velvet cloak that might have been made of a coffin pall, and with a sombre hat, such as mourners wear, drooping its broad brim over his heavy brows. Glancing behind them, the lovers well knew who it was that followed, but wished from their hearts that he had been elsewhere, as being a companion so strangely unsuited to their joyous errand. It was a near relative of Lilies Fay, an old man by the name of Walter Gascoigne, who had long labored under the burden of a melancholy spirit, which was sometimes maddened into absolute insanity, and always had a tinge of it. What a contrast between the young pilgrims of bliss and their unbidden associate! They looked as if moulded of Heaven's sunshine, and he of earth's gloomiest shade; they flitted along like Hope and Joy, roaming hand in hand through life; while his darksome figure stalked behind, a type of all the woeful influences which life could fling upon them. But the three had not gone far, when they reached a spot that pleased the gentle Lily, and she paused.

"What sweeter place shall we find than this?" said she. "Why should we seek farther for the site of our Temple?"

It was indeed a delightful spot of earth, though undistinguished by any very prominent beauties, being merely a nook in the shelter of a hill, with the prospect of a distant lake in one direction, and of a church-spire in another. There were vistas and pathways leading onward and onward into the green woodlands, and vanishing away in the glimmering shade. The Temple, if erected here, would look towards the west: so that the lovers could shape all sorts of magnificent dreams out of the purple, violet, and gold of the sunset sky; and few of their anticipated pleasures were dearer than this sport of fantasy.

"Yes," said Adam Forrester, "we might seek all day, and find no lovelier spot. We will build our Temple here."

But their sad old companion, who had taken his stand on the very site which they proposed to cover with a marble floor, shook his head and frowned; and the young man and the Lily deemed it almost enough to blight the spot, and desecrate it for their airy Temple, that his dismal figure had thrown its shadow there. He pointed to some scattered stones, the remnants of a former structure, and to flowers such as young girls delight to nurse in their gardens, but which had now relapsed into the wild simplicity of nature.

"Not here!" cried old Walter Gascoigne. "Here, long ago, other mortals built their Temple of Happiness. Seek another site for yours!"

"What!" exclaimed Lilias Fay. "Have any ever planned such a Temple, save ourselves?"

"Poor child!" said her gloomy kinsman. "In one shape or other, every mortal has dreamed your dream."

Then he told the lovers, how—not, indeed, an antique Temple—but a dwelling had once stood there, and that a dark-clad guest had dwelt among its inmates, sitting forever at the fireside, and poisoning all their household mirth....