The Lights of the Church and the Light of Science 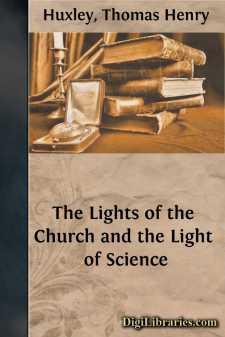 There are three ways of regarding any account of past occurrences, whether delivered to us orally or recorded in writing.

The narrative may be exactly true. That is to say, the words, taken in their natural sense, and interpreted according to the rules of grammar, may convey to the mind of the hearer, or of the reader an idea precisely correspondent with one which would have remained in the mind of a witness. For example, the statement that King Charles the First was beheaded at Whitehall on the 30th day of January 1649, is as exactly true as any proposition in mathematics or physics; no one doubts that any person of sound faculties, properly placed, who was present at Whitehall throughout that day, and who used his eyes, would have seen the King's head cut off; and that there would have remained in his mind an idea of that occurrence which he would have put into words of the same value as those which we use to express it.

Or the narrative may be partly true and partly false. Thus, some histories of the time tell us what the King said, and what Bishop Juxon said; or report royalist conspiracies to effect a rescue; or detail the motives which induced the chiefs of the Commonwealth to resolve that the King should die. One account declares that the King knelt at a high block, another that he lay down with his neck on a mere plank. And there are contemporary pictorial representations of both these modes of procedure. Such narratives, while veracious as to the main event, may and do exhibit various degrees of unconscious and conscious misrepresentation, suppression, and invention, till they become hardly distinguishable from pure fictions. Thus, they present a transition to narratives of a third class, in which the fictitious element predominates. Here, again, there are all imaginable gradations, from such works as Defoe's quasi-historical account of the Plague year, which probably gives a truer conception of that dreadful time than any authentic history, through the historical novel, drama, and epic, to the purely phantasmal creations of imaginative genius, such as the old "Arabian Nights" or the modern "Shaving of Shagpat." It is not strictly needful for my present purpose that I should say anything about narratives which are professedly fictitious. Yet it may be well, perhaps, if I disclaim any intention of derogating from their value, when I insist upon the paramount necessity of recollecting that there is no sort of relation between the ethical, or the aesthetic, or even the scientific importance of such works, and their worth as historical documents. Unquestionably, to the poetic artist, or even to the student of psychology, "Hamlet" and "Macbeth" may be better instructors than all the books of a wilderness of professors of aesthetics or of moral philosophy. But, as evidence of occurrences in Denmark, or in Scotland, at the times and places indicated, they are out of court; the profoundest admiration for them, the deepest gratitude for their influence, are consistent with the knowledge that, historically speaking, they are worthless fables, in which any foundation of reality that may exist is submerged beneath the imaginative superstructure....