The Light That Failed 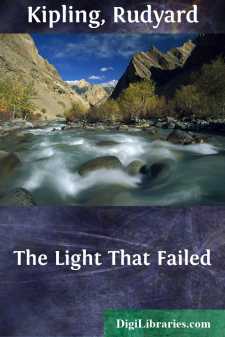 'WHAT do you think she'd do if she caught us? We oughtn't to have it, you know,' said Maisie.

'Beat me, and lock you up in your bedroom,' Dick answered, without hesitation. 'Have you got the cartridges?'

'Yes; they're in my pocket, but they are joggling horribly. Do pin-fire cartridges go off of their own accord?'

'Don't know. Take the revolver, if you are afraid, and let me carry them.'

'I'm not afraid.' Maisie strode forward swiftly, a hand in her pocket and her chin in the air. Dick followed with a small pin-fire revolver.

The children had discovered that their lives would be unendurable without pistol-practice. After much forethought and self-denial, Dick had saved seven shillings and sixpence, the price of a badly constructed Belgian revolver. Maisie could only contribute half a crown to the syndicate for the purchase of a hundred cartridges. 'You can save better than I can, Dick,' she explained; 'I like nice things to eat, and it doesn't matter to you. Besides, boys ought to do these things.'

Dick grumbled a little at the arrangement, but went out and made the purchase, which the children were then on their way to test. Revolvers did not lie in the scheme of their daily life as decreed for them by the guardian who was incorrectly supposed to stand in the place of a mother to these two orphans. Dick had been under her care for six years, during which time she had made her profit of the allowances supposed to be expended on his clothes, and, partly through thoughtlessness, partly through a natural desire to pain,—she was a widow of some years anxious to marry again,—had made his days burdensome on his young shoulders.

Where he had looked for love, she gave him first aversion and then hate.

Where he growing older had sought a little sympathy, she gave him ridicule. The many hours that she could spare from the ordering of her small house she devoted to what she called the home-training of Dick Heldar. Her religion, manufactured in the main by her own intelligence and a keen study of the Scriptures, was an aid to her in this matter. At such times as she herself was not personally displeased with Dick, she left him to understand that he had a heavy account to settle with his Creator; wherefore Dick learned to loathe his God as intensely as he loathed Mrs. Jennett; and this is not a wholesome frame of mind for the young. Since she chose to regard him as a hopeless liar, but an economical and self-contained one, never throwing away the least unnecessary fib, and never hesitating at the blackest, were it only plausible, that might make his life a little easier. The treatment taught him at least the power of living alone,—a power that was of service to him when he went to a public school and the boys laughed at his clothes, which were poor in quality and much mended....