The Light of the Star A Novel 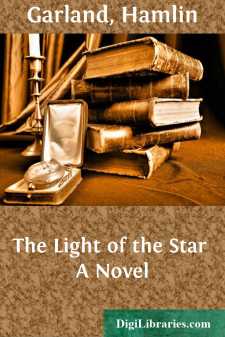 THE LIGHT OF THE STAR I

FTER the appointment with Miss Merival reached him (through the hand of her manager), young Douglass grew feverishly impatient of the long days which lay between. Waiting became a species of heroism. Each morning he reread his manuscript and each evening found him at the theatre, partly to while away the time, but mainly in order that he might catch some clew to the real woman behind the shining mask. His brain was filled with the light of the star—her radiance dazzled him.

By day he walked the streets, seeing her name on every bill-board, catching the glow of her subtle and changeful beauty in every window. She gazed out at him from brows weary with splendid barbaric jewels, her eyes bitter and disdainful, and hopelessly sad. She smiled at him in framework of blue and ermine and pearls—the bedecked, heartless coquette of the pleasure-seeking world. She stood in the shadow of gray walls, a grating over her head, with deep, soulful, girlish eyes lifted in piteous appeal; and in each of these characters an unfathomed depth remained to vex and to allure him.

Magnified by these reflections on the walls, haloed by the teeming praise and censure of the press, she seemed to dominate the entire city as she had come to absorb the best of his own life. What her private character really was no one seemed to know, in spite of the special articles and interviews with her managers which fed the almost universal adulation of her dark and changeful face, her savage and sovereign beauty. There was insolence in her tread, and mad allurement in the rounded beauty of her powerful white arm—and at his weakest the young playwright admitted that all else concerning her was of no account.

At the same time he insisted that he was not involved with the woman—only with the actress. "I am not a lover—I am a playwright, eager to have my heroine adequately portrayed," he contended with himself in the solitude of his room, high in one of the great apartment buildings of the middle city. Nevertheless, the tremor in his nerves caused him thought.

Her voice. Yes, that, too, was mysterious. Whence came that undertone like the moan of a weary wastrel tortured with dreams of idyllic innocence long lost? Why did her utterance, like her glorious face, always suggest some inner, darker meaning? There were times when she seemed old—old as vice and cruelty, hoarse with complaints, with curses, and then again her lips were childishly sweet, and her voice carried only the wistful accents of adolescence or the melody of girlish awe.

On the night before his appointment she played The Baroness Telka, a lurid, lustful, remorseless woman—a creature with a vampire's heart and the glamour of Helen of Troy—a woman whose cheeks were still round and smooth, but whose eyes were alight with the flame of insanity—a frightful, hungry, soulless wretch. And as he sat at the play and watched that glittering, inexplicable woman, and thought of her rôles, Douglass asked himself: "How will she meet me to-morrow?...