The Life of Yakoob Beg Athalik Ghazi, and Badaulet; Ameer of Kashgar 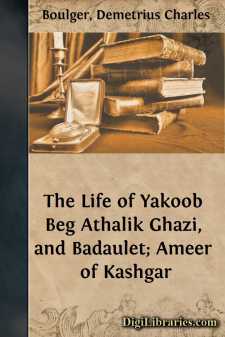 The following account of the life of Yakoob Beg was written with a twofold intention. In the first place, it attempts to trace the career of a soldier of fortune, who, without birth, power, or even any great amount of genius, constructed an independent rule in Central Asia, and maintained it against many adversaries during the space of twelve years. The name of the Athalik Ghazi became so well known in this country, and his person was so exaggerated by popular report, that those who come to these pages with a belief that their hero will be lauded to the skies must be disappointed. Yakoob Beg was a very able and courageous man, and the task he did accomplish in Kashgaria was in the highest degree creditable; but he was no Timour or Babur. His internal policy was marred by his severity, and the system of terrorism that he principally adopted; and his external policy, bold and audacious as it often was, was enfeebled by periods of vacillation and doubt. Yet his career was truly remarkable. He was not the arbiter of the destinies of Central Asia, nor was he even the consistent opponent of Russian claims to supremacy therein. He was essentially of the common mould of human nature, sharing the weaknesses and the fears of ordinary men. The Badaulet, or "the fortunate one," as he was called, was essentially indebted to good fortune in many crises of his career. He cannot, in any sense, be compared to the giants produced by Central Asia in days of old; and among moderns Dost Mahomed of Afghanistan probably should rank as high as he does. Yet he gives an individuality to the history of Kashgar that it would otherwise lack. The recent triumphs of the Chinese received all their attraction to Englishmen from the decline and fall of Yakoob Beg, the hero they had erected in the country north of Cashmere.

In the second place, the following pages strive to bring before the English reader the great merits of China as a governing power; and this object is really the more important of the two. It is absolutely necessary for this country to remember that there are only three Great Powers in Asia, and of these China is in many respects the foremost. Whereas both England and Russia are simply conquering Governments, China is a mighty and self-governing country. China's rule in Eastern Turkestan and Jungaria is one of the most instructive pages in the history of modern Asia, yet it may freely be admitted that the brief career of Yakoob Beg gave an interest to the consideration of the Chinese in Central Asia that that theme might otherwise have failed to supply. The authorities used in the compilation of the facts upon which the following pages have been erected are principally and above all the official Report of Sir Douglas Forsyth, and the files of the Tashkent and Pekin Gazettes since the beginning of 1874. Mr. Shaw's most interesting work on "High Tartary," Dr. Bellew's "Kashgar," and Gregorieff's work on "Eastern Turkestan," have also been consulted in various portions of the narrative....