The Lesson of the Master 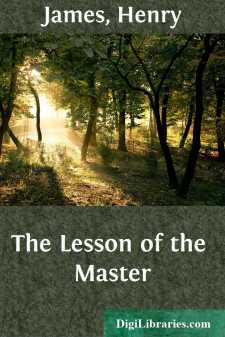 He had been told the ladies were at church, but this was corrected by what he saw from the top of the steps—they descended from a great height in two arms, with a circular sweep of the most charming effect—at the threshold of the door which, from the long bright gallery, overlooked the immense lawn.  Three gentlemen, on the grass, at a distance, sat under the great trees, while the fourth figure showed a crimson dress that told as a “bit of colour” amid the fresh rich green.  The servant had so far accompanied Paul Overt as to introduce him to this view, after asking him if he wished first to go to his room.  The young man declined that privilege, conscious of no disrepair from so short and easy a journey and always liking to take at once a general perceptive possession of a new scene.  He stood there a little with his eyes on the group and on the admirable picture, the wide grounds of an old country-house near London—that only made it better—on a splendid Sunday in June.  “But that lady, who’s she?” he said to the servant before the man left him.

“Mrs. St. George, the wife of the distinguished—”  Then Paul Overt checked himself, doubting if a footman would know.

“Yes, sir—probably, sir,” said his guide, who appeared to wish to intimate that a person staying at Summersoft would naturally be, if only by alliance, distinguished.  His tone, however, made poor Overt himself feel for the moment scantly so.

“And the gentlemen?” Overt went on.

“Ah yes, I know; thank you.”  General Fancourt was distinguished, there was no doubt of that, for something he had done, or perhaps even hadn’t done—the young man couldn’t remember which—some years before in India.  The servant went away, leaving the glass doors open into the gallery, and Paul Overt remained at the head of the wide double staircase, saying to himself that the place was sweet and promised a pleasant visit, while he leaned on the balustrade of fine old ironwork which, like all the other details, was of the same period as the house.  It all went together and spoke in one voice—a rich English voice of the early part of the eighteenth century.  It might have been church-time on a summer’s day in the reign of Queen Anne; the stillness was too perfect to be modern, the nearness counted so as distance, and there was something so fresh and sound in the originality of the large smooth house, the expanse of beautiful brickwork that showed for pink rather than red and that had been kept clear of messy creepers by the law under which a woman with a rare complexion disdains a veil.  When Paul Overt became aware that the people under the trees had noticed him he turned back through the open doors into the great gallery which was the pride of the place.  It marched across from end to end and seemed—with its bright colours, its high panelled windows, its faded flowered chintzes, its quickly-recognised portraits and pictures, the blue-and-white china of its cabinets and the attenuated festoons and rosettes of its ceiling—a cheerful upholstered avenue into the other century....