The Laws Of War, Affecting Commerce And Shipping 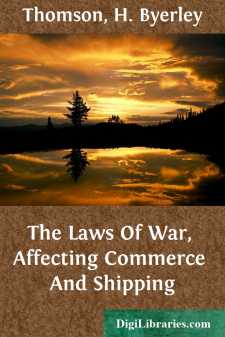 INTRODUCTION TO PART I.

It would be superfluous to trouble my readers, in a concise practical treatise, with any theoretical discussion on the origin of the Law of Nations, had not questions of late been often asked, respecting the means of accommodating rules decided nearly half-a-century ago, to those larger views of international duty and universal humanity, that have been the natural result of a long Peace, and general progress.

To commence with the question, Who is the international legislator? it must be observed, that there is no general body that can legislate on this subject; no parliament of nations that can discuss and alter the law already defined. The Maritime Tribunals of maritime states always have been, and still are, almost the sole interpreters and mouthpieces of the International Law. Attempts that have been made by our own parliaments, by individual sovereigns, and even by congressional assemblies of the ministers of European powers, to create new universal laws, have been declared by these courts to be invalid, and of no authority. And though it is distinctly laid down, that the Law of Nations forms a part of the Common Law of England, yet it is not subject to change by Act of Parliament, as other portions of the Common Law are; except so far as Parliament can change the form, constitution, and persons of the courts that declare the law.

"No British Act of Parliament, nor any commission founded upon it, can affect the rights or interests of foreigners, unless they are founded upon principles, and impose regulations, that are consistent with the Law of Nations."

And in another place—

"Much stress has been laid upon the solemn declaration of the eminent persons (the ministers of the European powers), assembled in Congress (at Vienna). Great as the reverence due to such authorities may be, they cannot, I think, be admitted to have the force of over-ruling the established course of the general Law of Nations."

It is to the Maritime Courts, then, of this and other countries, that the hopes of civilization must look for improvement and advance in the canons of international intercourse during the unhappy time of war. The manner, and the feeling in which they are to pronounce those canons cannot be more finely enunciated than in the words of Lord Stowell himself.

"I consider myself as stationed here, not to deliver occasional and shifting opinions to serve present purposes of particular national interest, but to administer with indifference that justice which the Law of Nations holds out, without distinction, to independent states, some happening to be neutral, and some belligerent.

"The seat of judicial authority is indeed locally here in the belligerent country, according to the known law and practice of nations; but the law itself has no locality. It is the duty of the person who sits here to determine this question exactly as he would determine the same question, if sitting at Stockholm; to assert no pretensions on the part of Great Britain, which he would not allow to Sweden in the same circumstances; and to impose no duties on Sweden, as a neutral country, which he would not admit to belong to Great Britain, in the same character....