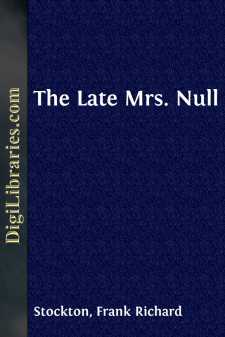 There was a wide entrance gate to the old family mansion of Midbranch, but it was never opened to admit the family or visitors; although occasionally a load of wood, drawn by two horses and two mules, came between its tall chestnut posts, and was taken by a roundabout way among the trees to a spot at the back of the house, where the chips of several generations of sturdy wood-choppers had formed a ligneous soil deeper than the arable surface of any portion of the nine hundred and fifty acres which formed the farm of Midbranch. This seldom opened gate was in a corner of the lawn, and the driving of carriages, or the riding of horses through it to the porch at the front of the house would have been the ruin of the short, thick grass which had covered that lawn, it was generally believed, ever since Virginia became a State.

But there had to be some way for people who came in carriages or on horseback to get into the house, and therefore the fence at the bottom of the lawn, at a point directly in front of the porch, was crossed by a set of broad wooden steps, five outside and five inside, with a platform at the top. These stairs were wide enough to accommodate eight people abreast; so that if a large carriage load of visitors arrived, none of them need delay in crossing the fence. At the outside of the steps ran the narrow road which entered the plantation a quarter of a mile away, and passed around the lawn and the garden to the barns and stables at the back.

On the other side of the road, undivided from it by hedge or fence, stretched, like a sea gently moved by a groundswell, a vast field, sometimes planted in tobacco, and sometimes in wheat. In the midst of this field stood a tall persimmon tree which yearly dropped its half-candied fruit upon the first light snow of the winter. It is true that persimmons, quite fit to eat, were to be found on this tree at an earlier period than this, but such fruit was never noticed by the people in those parts, who would not rudely wrench from Jack Frost his one little claim to rivalry with the sun as a fruit-ripener. To the right of the field was a wide extent of pasture land, running down to a small stream, or "branch," which, flowing between two other streams of the same kind a mile or two on either side of it, had given its name to the place. In front, to the left, lay a great forest of chestnut, oak, sassafras, and sweet gum, with here and there a clump of tall pines, standing up straight and stiff with an air of Puritanic condemnation of the changing fashions of the foliage about them.

On one side of the platform of the broad stile, which has been mentioned, sat one summer afternoon, the lady of the house. She was a young woman, and although her face was a good deal shadowed by her far-spreading hat, it was easy to perceive that she was a handsome one. She was the niece of Mr Robert Brandon, the elderly bachelor who owned Midbranch; and her mother, long since dead, had called her Roberta, which was as near as she could come to the name of her only brother....