The Lady, or the Tiger? 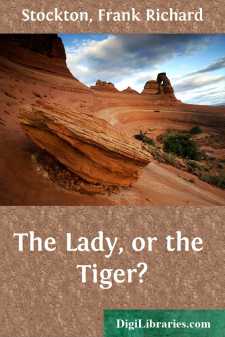 In the very olden time there lived a semi-barbaric king, whose ideas, though somewhat polished and sharpened by the progressiveness of distant Latin neighbors, were still large, florid, and untrammeled, as became the half of him which was barbaric. He was a man of exuberant fancy, and, withal, of an authority so irresistible that, at his will, he turned his varied fancies into facts. He was greatly given to self-communing, and, when he and himself agreed upon anything, the thing was done. When every member of his domestic and political systems moved smoothly in its appointed course, his nature was bland and genial; but, whenever there was a little hitch, and some of his orbs got out of their orbits, he was blander and more genial still, for nothing pleased him so much as to make the crooked straight and crush down uneven places.

Among the borrowed notions by which his barbarism had become semified was that of the public arena, in which, by exhibitions of manly and beastly valor, the minds of his subjects were refined and cultured.

But even here the exuberant and barbaric fancy asserted itself. The arena of the king was built, not to give the people an opportunity of hearing the rhapsodies of dying gladiators, nor to enable them to view the inevitable conclusion of a conflict between religious opinions and hungry jaws, but for purposes far better adapted to widen and develop the mental energies of the people. This vast amphitheater, with its encircling galleries, its mysterious vaults, and its unseen passages, was an agent of poetic justice, in which crime was punished, or virtue rewarded, by the decrees of an impartial and incorruptible chance.

When a subject was accused of a crime of sufficient importance to interest the king, public notice was given that on an appointed day the fate of the accused person would be decided in the king's arena, a structure which well deserved its name, for, although its form and plan were borrowed from afar, its purpose emanated solely from the brain of this man, who, every barleycorn a king, knew no tradition to which he owed more allegiance than pleased his fancy, and who ingrafted on every adopted form of human thought and action the rich growth of his barbaric idealism.

When all the people had assembled in the galleries, and the king, surrounded by his court, sat high up on his throne of royal state on one side of the arena, he gave a signal, a door beneath him opened, and the accused subject stepped out into the amphitheater. Directly opposite him, on the other side of the inclosed space, were two doors, exactly alike and side by side. It was the duty and the privilege of the person on trial to walk directly to these doors and open one of them. He could open either door he pleased; he was subject to no guidance or influence but that of the aforementioned impartial and incorruptible chance. If he opened the one, there came out of it a hungry tiger, the fiercest and most cruel that could be procured, which immediately sprang upon him and tore him to pieces as a punishment for his guilt. The moment that the case of the criminal was thus decided, doleful iron bells were clanged, great wails went up from the hired mourners posted on the outer rim of the arena, and the vast audience, with bowed heads and downcast hearts, wended slowly their homeward way, mourning greatly that one so young and fair, or so old and respected, should have merited so dire a fate.

But, if the accused person opened the other door, there came forth from it a lady, the most suitable to his years and station that his majesty could select among his fair subjects, and to this lady he was immediately married, as a reward of his innocence. It mattered not that he might already possess a wife and family, or that his affections might be engaged upon an object of his own selection; the king allowed no such subordinate arrangements to interfere with his great scheme of retribution and reward....