The Kipling Reader Selections from the Books of Rudyard Kipling 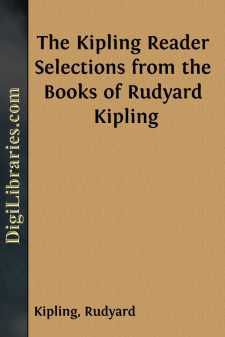 This is the story of the great war that Kikki-tikki-tavi fought single-handed, through the bath-rooms of the big bungalow in Segowlee cantonment. Darzee, the tailor-bird, helped him, and Chuchundra, the musk-rat, who never comes out into the middle of the floor, but always creeps round by the wall, gave him advice; but Rikki-tikki did the real fighting.

He was a mongoose, rather like a little cat in his fur and his tail, but quite like a weasel in his head and habits. His eyes and the end of his restless nose were pink; he could scratch himself anywhere he pleased, with any leg, front or back, that he chose to use; he could fluff up his tail till it looked like a bottle-brush, and his war-cry, as he scuttled through the long grass, was: 'Rikk-tikk-tikki-tikki-tchk!'

One day, a high summer flood washed him out of the burrow where he lived with his father and mother, and carried him, kicking and clucking, down a roadside ditch. He found a little wisp of grass floating there, and clung to it till he lost his senses. When he revived, he was lying in the hot sun on the middle of a garden path, very draggled indeed, and a small boy was saying: 'Here's a dead mongoose. Let's have a funeral.'

'No,' said his mother; 'let's take him in and dry him. Perhaps he isn't really dead.'

They took him into the house, and a big man picked him up between his finger and thumb, and said he was not dead but half choked; so they wrapped him in cotton-wool, and warmed him and he opened his eyes and sneezed.

'Now,' said the big man (he was an Englishman who had just moved into the bungalow); 'don't frighten him and we'll see what he'll do.'

It is the hardest thing in the world to frighten a mongoose, because he is eaten up from nose to tail with curiosity. The motto of all the mongoose family is 'Run and find out'; and Rikki-tikki was a true mongoose. He looked at the cotton-wool, decided that it was not good to eat, ran all round the table, sat up and put his fur in order, scratched himself, and jumped on the small boy's shoulder.

'Don't be frightened, Teddy,' said his father. 'That's his way of making friends.'

Rikki-tikki looked down between the boy's collar and neck, snuffed at his ear, and climbed down to the floor, where he sat rubbing his nose.