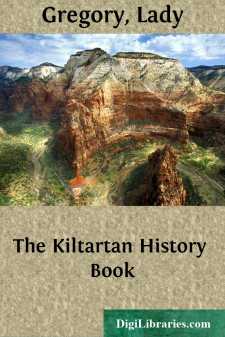 "As to the old history of Ireland, the first man ever died in Ireland was Partholan, and he is buried, and his greyhound along with him, at some place in Kerry. The Nemidians came after that and stopped for a while, and then they all died of some disease. And then the Firbolgs came, the best men that ever were in Ireland, and they had no law but love, and there was never such peace and plenty in Ireland. What religion had they? None at all. And there was a low-sized race came that worked the land of Ireland a long time; they had their time like the others. Many would tell you Grania slept under the cromlechs, but I don't believe that, and she a king's daughter. And I don't believe she was handsome either. If she was, why would she have run away? In the old time the people had no envy, and they would be writing down the stories and the songs for one another. But they are too venemous now to do that. And as to the people in the towns, they don't care for such things now, they are too corrupted with drink."

"The Goban was the master of sixteen trades. There was no beating him; he had got the gift. He went one time to Quin Abbey when it was building, looking for a job, and the men were going to their dinner, and he had poor clothes, and they began to jibe at him, and the foreman said 'Make now a cat-and-nine-tails while we are at our dinner, if you are any good.' And he took the chisel and cut it in the rough in the stone, a cat with nine tails coming from it, and there it was complete when they came out from their dinner. There was no beating him. He learned no trade, but he was master of sixteen. That is the way, a man that has the gift will get more out of his own brain than another will get through learning. There is many a man without learning will get the better of a college-bred man, and will have better words too. Those that make inventions in these days have the gift, such a man now as Edison, with all he has got out of electricity."

"The Goban Saor was a mason and a smith, and he could do all things, and he was very witty. He was going from home one time and he said to the wife 'If it is a daughter you have this time I'll kill you when I come back'; for up to that time he had no sons, but only daughters. And it was a daughter she had; but a neighbouring woman had a son at the same time, and they made an exchange to save the life of the Goban's wife. But when the boy began to grow up he had no wit, and the Goban knew by that he was no son of his. That is the reason he wanted a witty wife for him. So there came a girl to the house one day, and the Goban Saor bade her look round at all that was in the room, and he said 'Do you think a couple could get a living out of this?' 'They could not,' she said. So he said she wouldn't do, and he sent her away. Another girl came another day, and he bade her take notice of all that was in the house, and he said 'Do you think could a couple knock a living out of this?' 'They could if they stopped in it,' she said....