The Jewel Merchants A Comedy in One Act 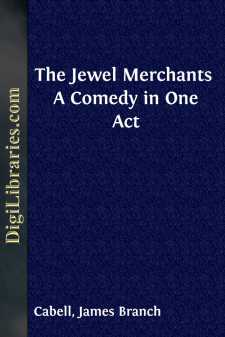 Prudence urges me here to forestall detection, by conceding that this brief play has no pretension to "literary" quality. It is a piece in its inception designed for, and in its making swayed by, the requirements of the little theatre stage. The one virtue which anybody anywhere could claim for The Jewel Merchants is the fact that it "acts" easily and rather effectively.

And candor compels the admission forthwith that the presence of this anchoritic merit in the wilderness is hardly due to me. When circumstances and the Little Theatre League of Richmond combined to bully me into contriving the dramatization of a short story called Balthazar's Daughter, I docilely converted this tale into a one-act play of which you will find hereinafter no sentence. The comedy I wrote is now at one with the lost dramaturgy of Pollio and of Posidippus, and is even less likely ever to be resurrected for mortal auditors.

It read, I still think, well enough: I am certain that, when we came to rehearse, the thing did not "act" at all, and that its dialogue, whatever its other graces, had the defect of being unspeakable. So at each rehearsal we—by which inclusive pronoun I would embrace the actors and the producing staff at large, and with especial (metaphorical) ardor Miss Louise Burleigh, who directed all—changed here a little, and there a little more; and shifted this bit, and deleted the other, and "tried out" everybody's suggestions generally, until we got at least the relief of witnessing at each rehearsal a different play. And steadily my manuscript was enriched with interlineations, to and beyond the verge of legibility, as steadily I substituted, for the speeches I had rewritten yesterday, the speeches which the actor (having perfectly in mind the gist but not the phrasing of what was meant) delivered naturally.

This process made, at all events, for what we in particular wanted, which was a play that the League could stage for half an evening's entertainment; but it left existent not a shred of the rhetorical fripperies which I had in the beginning concocted, and it made of the actual first public performance a collaboration with almost as many contributing authors as though the production had been a musical comedy.

And if only fate had gifted me with an exigent conscience and a turn for oratory, I would, I like to think, have publicly confessed, at that first public performance, to all those tributary clarifying rills to the play's progress: but, as it was, vainglory combined with an aversion to "speech-making" to compel a taciturn if smirking acceptance of the curtain-call with which an indulgent audience flustered the nominal author of The Jewel Merchants…. Now, in any case, it is due my collaborators to tell you that The Jewel Merchants has amply fulfilled the purpose of its makers by being enacted to considerable applause,—and is a pleasure to add that this succès d'estime was very little chargeable to anything which I contributed to the play.

For another matter, I would here confess that The Jewel Merchants, in addition to its "literary" deficiencies, lacks moral fervor. It will, I trust, corrupt no reader irretrievably, to untraversable leagues beyond the last hope of redemption: but, even so, it is a frankly unethical performance. You must accept this resuscitated trio, if at all, very much as they actually went about Tuscany, in long ago discarded young flesh, when the one trait everywhere common to their milieu was the absence of any moral excitement over such-and-such an action's being or not being "wicked." This phenomenon of Renaissance life, as lived in Italy in particular, has elsewhere been discussed time and again, and I lack here the space, and the desire, either to explain or to apologize for the era's delinquencies....