The Irrational Knot Being the Second Novel of His Nonage 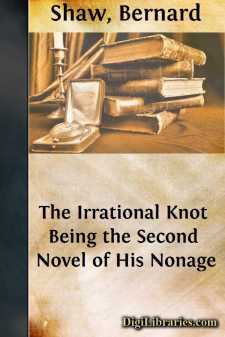 At seven o'clock on a fine evening in April the gas had just been lighted in a room on the first floor of a house in York Road, Lambeth. A man, recently washed and brushed, stood on the hearthrug before a pier glass, arranging a white necktie, part of his evening dress. He was about thirty, well grown, and fully developed muscularly. There was no cloud of vice or trouble upon him: he was concentrated and calm, making no tentative movements of any sort (even a white tie did not puzzle him into fumbling), but acting with a certainty of aim and consequent economy of force, dreadful to the irresolute. His face was brown, but his auburn hair classed him as a fair man.

The apartment, a drawing-room with two windows, was dusty and untidy. The paint and wall paper had not been renewed for years; nor did the pianette, which stood near the fireplace, seem to have been closed during that time; for the interior was dusty, and the inner end of every key begrimed. On a table between the windows were some tea things, with a heap of milliner's materials, and a brass candlestick which had been pushed back to make room for a partially unfolded cloth. There was a second table near the door, crowded with coils, batteries, a galvanometer, and other electrical apparatus. The mantelpiece was littered with dusty letters, and two trays of Doulton ware which ornamented it were filled with accounts, scraps of twine, buttons, and rusty keys.

A shifting, rustling sound, as of somebody dressing, which had been audible for some minutes through the folding doors, now ceased, and a handsome young woman entered. She had thick black hair, fine dark eyes, an oval face, a clear olive complexion, and an elastic figure. She was incompletely attired in a petticoat that did not hide her ankles, and stays of bright red silk with white laces and seams. Quite unconcerned at the presence of the man, she poured out a cup of tea; carried it to the mantelpiece; and began to arrange her hair before the glass. He, without looking round, completed the arrangement of his tie, looked at it earnestly for a moment, and said, "Have you got a pin about you?"

"There is one in the pincushion on my table," she said; "but I think it's a black one. I dont know where the deuce all the pins go to." Then, casting off the subject, she whistled a long and florid cadenza, and added, by way of instrumental interlude, a remarkably close imitation of a violoncello. Meanwhile the man went into her room for the pin. On his return she suddenly became curious, and said, "Where are you going to-night, if one may ask?"

She looked at him for a moment, and turned contemptuously to the mirror, saying, "Thank you. Sorry to be inquisitive."

"I am going to sing for the Countess of Carbury at a concert atWandsworth."

"Sing! You! The Countess of Barbury! Does she live at Wandsworth?"

"Oh! I beg her pardon." The man made no comment on this; and she, after looking doubtfully at him to assure herself that he was in earnest, continued, "How does the Countess of Whatshername come to know you, pray?"