The Iroquois Book of Rites 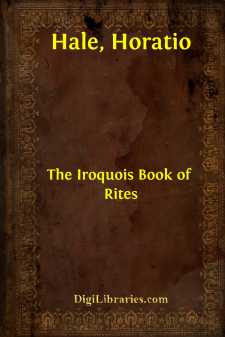 At the outset of the sixteenth century, when the five tribes or"nations" of the Iroquois confederacy first became known to Europeanexplorers, they were found occupying the valleys and uplands of northernNew York, in that picturesque and fruitful region which stretcheswestward from the head-waters of the Hudson to the Genesee. The Mohawks,or Caniengas—as they should properly be called—possessed the MohawkRiver, and covered Lake George and Lake Champlain with their flotillasof large canoes, managed with the boldness and skill which, hereditaryin their descendants, make them still the best boatmen of the NorthAmerican rivers. West of the Caniengas the Oneidas held the small riverand lake which bear their name, the first in that series of beautifullakes, united by interlacing streams, which seemed to prefigure in thefeatures of nature the political constitution of the tribes whopossessed them. West of the Oneidas, the imperious Onondagas, thecentral and, in some respects, the ruling nation of the League,possessed the two lakes of Onondaga and Skeneateles, together with thecommon outlet of this inland lake system, the Oswego River, to its issueinto Lake Ontario. Still proceeding westward, the lines of trail andriver led to the long and winding stretch of Lake Cayuga, about whichwere clustered the towns of the people who gave their name to the lake;and beyond them, over the wide expanse of hills and dales surroundingLakes Seneca and Canandaigua, were scattered the populous villages ofthe Senecas, more correctly styled Sonontowanas or Mountaineers. Suchwere the names and abodes of the allied nations, members of thefar-famed Kanonsionni, or League of United Households, who were destinedto become for a time the most notable and powerful community among thenative tribes of North America. [Footnote: See Appendix, note A, for theorigin and meaning of the names commonly given to the Iroquois nations.]

The region which has been described was not, however, the original seatof those nations. They belonged to that linguistic family which is knownto ethnologists as the Huron-Iroquois stock. This stock comprised theHurons or Wyandots, the Attiwandaronks or Neutral Nation, the Iroquois,the Eries, the Andastes or Conestogas, the Tuscaroras, and some smallerbands. The tribes of this family occupied a long, irregular area ofinland territory, stretching from Canada to North Carolina. The northernnations were all clustered about the great lakes; the southern bandsheld the fertile valleys bordering the head-waters of the rivers whichflowed from the Allegheny mountains. The languages of all these tribesshowed a close affinity. There can be no doubt that their ancestorsformed one body, and, indeed, dwelt at one time (as has been well saidof the ancestors of the IndoEuropean populations), under one roof. Therewas a Huron-Iroquois "family-pair," from which all these tribes weredescended. In what part of the world this ancestral household resided isa question which admits of no reply, except from the merestconjecture....