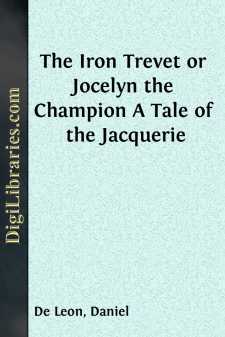 On a Sunday, towards the end of the month of October of 1356, a great stir was noticeable since early morning in the little town of Nointel, situated a few leagues from the city of Beauvais, in the department of Beauvoisis. The tavern of Alison the Huffy—so nicknamed from her hot temper, although she was a good woman—was rapidly filling with artisans, villeins and serfs who came to wait for the hour of mass at the tavern, where, due to the prevailing poverty, little was drunk and much talked. Alison never complained. As talkative as huffy, dame Alison preferred to see her tavern full with chatterers than empty of tipplers. Still fresh and buxom, though on the shady side of thirty, she wore a short skirt and low bodice—probably because her bust was well rounded and her limbs well shaped. Black of hair, bright of eyes, white of teeth, and quick of hands, more than once since her widowhood, had Alison broken a bumper over the head of some customer, whom liquor had rendered too expressive in his admiration for her charms. Accordingly, like a prudent housekeeper, she had taken the precaution of replacing her earthenware bumpers with pewter ones. That morning the dame seemed to be in a particular huffy mood, judging by her rumpling brows, her brusque motions, and her sharp and cross words.

Presently, the door of the tavern was darkened and in stepped a man of vigorous age, with an angular and sun-burnt face, whose only striking features were two little, piercing, crafty and savage eyes half hidden under his eyebrows thick and grizzly like his hair, that escaped in disorder from under his old woolen cap. He had traveled a long distance; his wooden shoes, shabby cloth leggings and patched smock-frock were covered with dust. He was noticeably tired; it was with difficulty that he moved his limbs with the support of a knotted stick. Hardly inside the tavern, the serf, whose name was William Caillet, let himself down heavily upon a bench, immediately placing his elbows on his knees and his head upon his hands. Alison the Huffy, already out of humor, as stated, called to him sharply:

"In order to drink, money is needed; I have none," answered William Caillet; "allow me to rest on this bench, good woman."

"My tavern is no lazar-house," replied Alison; "be gone, you vagabond!"

"Come now, hostess, we have never seen you in such a bad humor," put in one of the customers; "let the poor man rest; we invite him to a bumper."

"Thank you," answered the serf with a somber gesture and shaking his head; "I'm not thirsty."

"If you do not drink you have no business here," the buxom tavern-keeper was saying when a voice, hailing from without, called: "Where is the hostess ... where is she ... a thousand bundles of demons! Is there no one here to take my horse? Our throats are dry and our tongues hanging out. Ho, there, hostess, attend to us!"

The arrival of a rider, always a good omen for a hostlery, drew Alison away from her anger. She called her maid servant while herself ran to the door to answer the impatient traveler, who, his horse's bridle in hand, continued finding fault, although good-naturedly. The new arrival was about twenty-four years of age; the visor of his somewhat rusty casque, wholly raised, exposed to view a pleasant face, the left cheek of which was furrowed with a deep scar. Thanks to his Herculean build, his heavy cuirass of tarnished iron, but still usable, seemed not to press him any more than a coat of cloth. His coat of mail, newly patched in several places, fell half over his thigh-armor, made, like his greaves, of iron, the latter of which were hidden within the large traveling boots. From his shoulder-strap hung a long sword, from his belt a sharp dagger of the class called "mercy". His mace, which consisted of a thick cudgel an arm long, terminating in three little iron chains riveted to a ball seven or eight pounds heavy, hung from the pommel of the rider's saddle, together with his steel-studded and ribbed buckler. Three reserve wooden lance shafts, tied together, and the points of which rested in a sort of leather bonnet, adjusted to the strap of one of his stirrups, were held up straight along the saddle, behind which a sheep-skin satchel was attached. The horse was large and vigorous. Its head, neck, chest and part of its crupper were protected by an iron caparison—a heavy armor that the robust animal carried as easily as its master wore his.

Responding to the redoubled calls of the traveler, Alison the Huffy ran out with her maid and said in bitter-sweet voice: "Here I am, Sir. Hein! If ever you are canonized, it will not be, I very much fear, under the invocation of St....