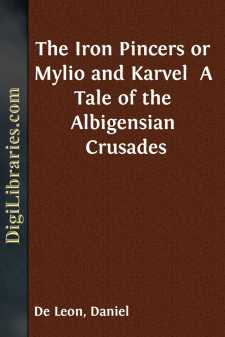 What I here have to narrate occurs towards evening on a beautiful autumn day, in the orchard of Marphise, the noble Lady of Ariol. The orchard, which lies in the close vicinity of the ramparts of the city of Blois, is surrounded by a high wall, crowned by a hedge of yoke-elm. A handsome summer-pavilion rises in the middle of the garden. The trees are numerous, and their fruit-laden branches are ingeniously intertwined with vines that bear clusters of purple grapes. Not far from the pavilion, a stately pine-tree casts its shadow across a white marble basin filled with limpid water and encircled by a broad band of lawn, on which roses, anemones and gladiolas blend their lively colors. A bench of verdure is contrived around the foot of the gigantic pine, whose dense foliage allows the setting rays of the sun to penetrate it here and there, and to empurple the crystal face of the water in the basin.

Twelve women, the eldest of whom, Marphise, the Lady of Ariol, has hardly reached her thirtieth year, and the youngest, Eglantine, Viscountess of Seligny, is not yet seventeen;—twelve women, the least handsome of whom would everywhere, except here, have been considered a star of beauty;—twelve women are assembled in this orchard. After a collation in which the wines of Blois, of Saumur and of Beaugency have moistened the delicate venison pasties, the eels preserved in mustard, the cold partridges seasoned in verjuice—a dainty repast that is rounded with toothsome confectionery and sweets, moistened, in their turn, with no less copious libations of hippocrass or other spiced wines—the eyes of the noble ladies begin to dance and their cheeks are inflamed.

Certain of being alone among themselves, and sheltered from indiscreet looks or inquisitive ears, the merry gossips observe neither in their words nor in their demeanor the reserve that, perhaps, they might observe elsewhere. Some, stretched at full length on the sward, turn the limpid water of the basin into a mirror, contemplate themselves, and make all manner of winsome grimaces at their own reflections in the water; others, perched upon a ladder, amuse themselves plucking the ruddy apples or mellow pears from the trees, and, as the petticoats of the noble ladies serve for aprons in which to gather their harvest, the color of their garters is often exposed—a circumstance that in no wise disturbs our climbers, knowing as they do, that their limbs are well shaped; others, again, hold themselves by the hands in a circle, and amidst peals of laughter indulge in a giddy whirl; while still others, being of a more indolent bent, repose upon the bench of verdure and lazily enjoy the balmy air of the delightful evening.

These indolent ones should be named. They are: Marphise, the Lady of Ariol; Eglantine, Viscountess of Seligny; and Deliane, Canoness of the sacred Chapter of Nivelle. Marphise, tall, dark, with eyebrows boldly arched and of no less deep a hue than her raven-black hair and large black eyes, would have resembled the antique Minerva if, like the goddess, Marphise had worn a brass casque on her head, and if her chest, massive and white as alabaster, were imprisoned in a cuirass, in short, if her physiognomy had recalled the austere dignity of the goddess of wisdom....