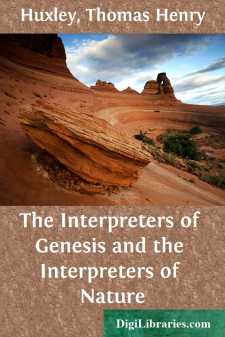 Our fabulist warns "those who in quarrels interpose" of the fate which is probably in store for them; and, in venturing to place myself between so powerful a controversialist as Mr. Gladstone and the eminent divine whom he assaults with such vigour in the last number of this Review, I am fully aware that I run great danger of verifying Gay's prediction. Moreover, it is quite possible that my zeal in offering aid to a combatant so extremely well able to take care of himself as M. Reville may be thought to savour of indiscretion.

Two considerations, however, have led me to face the double risk. The one is that though, in my judgment, M. Reville is wholly in the right in that part of the controversy to which I propose to restrict my observations, nevertheless he, as a foreigner, has very little chance of making the truth prevail with Englishmen against the authority and the dialectic skill of the greatest master of persuasive rhetoric among English-speaking men of our time. As the Queen's proctor intervenes, in certain cases, between two litigants in the interests of justice, so it may be permitted me to interpose as a sort of uncommissioned science proctor. My second excuse for my meddlesomeness is, that important questions of natural science—respecting which neither of the combatants professes to speak as an expert—are involved in the controversy; and I think it is desirable that the public should know what it is that natural science really has to say on these topics, to the best belief of one who has been a diligent student of natural science for the last forty years.

The original "Prolegomenes de l'Histoire des Religions" has not come in my way; but I have read the translation of M. Reville's work, published in England under the auspices of Professor Max Muller, with very great interest. It puts more fairly and clearly than any book previously known to me, the view which a man of strong religious feelings, but at the same time possessing the information and the reasoning power which enable him to estimate the strength of scientific methods of inquiry and the weight of scientific truth, may be expected to take of the relation between science and religion.

In the chapter on "The Primitive Revelation" the scientific worth of the account of the Creation given in the book of Genesis is estimated in terms which are as unquestionably respectful as, in my judgment, they are just; and, at the end of the chapter on "Primitive Tradition," M. Reville appraises the value of pentateuchal anthropology in a way which I should have thought sure of enlisting the assent of all competent judges, even if it were extended to the whole of the cosmogony and biology of Genesis:—

As, however, the original traditions of nations sprang up in anepoch less remote than our own from the primitive life, it isindispensable to consult them, to compare them, and to associatethem with other sources of information which are available.From this point of view, the traditions recorded in Genesispossess, in addition to their own peculiar charm, a value of thehighest order; but we cannot ultimately see in them more than avenerable fragment, well-deserving attention, of the greatgenesis of mankind.

Mr. Gladstone is of a different mind. He dissents from M. Reville's views respecting the proper estimation of the pentateuchal traditions, no less than he does from his interpretation of those Homeric myths which have been the object of his own special study. In the latter case, Mr. Gladstone tells M. Reville that he is wrong on his own authority, to which, in such a matter, all will pay due respect: in the former, he affirms himself to be "wholly destitute of that kind of knowledge which carries authority," and his rebuke is administered in the name and by the authority of natural science....