The Idea of God in Early Religions 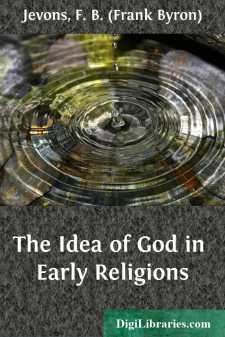 Every child that is born is born of a community and into a community, which existed before his birth and will continue to exist after his death. He learns to speak the language which the community spoke before he was born, and which the community will continue to speak after he has gone. In learning the language he acquires not only words but ideas; and the words and ideas he acquires, the thoughts he thinks and the words in which he utters them, are those of the community from which he learnt them, which taught them before he was born and will go on teaching them after he is dead. He not only learns to speak the words and think the ideas, to reproduce the mode of thought, as he does the form of speech, of the circumambient community: he is taught and learns to act as those around him do—as the community has done and will tend to do. The community—the narrower community of the family, first, and, afterwards, the wider community to which the family belongs—teaches him how he ought to speak, what he ought to think, and how he ought to act. The consciousness of the child reproduces the consciousness of the community to which he belongs—the common consciousness, which existed before him and will continue to exist after him.

The common consciousness is not only the source from which the individual gets his mode of speech, thought and action, but the court of appeal which decides what is fact. If a question is raised whether the result of a scientific experiment is what it is alleged by the original maker of the experiment to be, the appeal is to the common consciousness: any one who chooses to make the experiment in the way described will find the result to be of the kind alleged; if everyone else, on experiment, finds it to be so, it is established as a fact of common consciousness; if no one else finds it to be so, the alleged discovery is not a fact but an erroneous inference.

The child up to a certain age has no consciousness of self: the absence of self-consciousness is one of the charms of children. The child imitates its elders, who speak of him and to him by his name. He speaks of himself in the third person and not in the first person singular, and designates himself by his proper name and not by means of the personal pronoun 'I'; eventually the child acquires the use and to some extent learns the meaning of the first personal pronoun; that is, if the language of the community to which he belongs has developed so far as to have produced such a pronoun. For there was a period in the evolution of speech when, as yet, a first personal pronoun had not been evolved; and that, probably, for the simple reason that the idea which it denotes was as unknown to the community as it is to the child whose absence of self-consciousness is so pleasing. For a period, the length of which may have been millions of years, the common consciousness, the consciousness of the community, did not discover or discriminate, in language or in thought, the existence of the individual self.

The importance of this consideration lies in its bearing upon the question, in what form the idea of powers superior to man disclosed itself in the common consciousness at that period....