The House by the Church-Yard 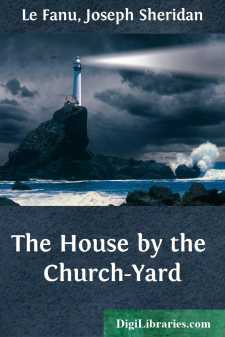 A PROLOGUE—BEING A DISH OF VILLAGE CHAT.

e are going to talk, if you please, in the ensuing chapters, of what was going on in Chapelizod about a hundred years ago. A hundred years, to be sure, is a good while; but though fashions have changed, some old phrases dropped out, and new ones come in; and snuff and hair-powder, and sacques and solitaires quite passed away—yet men and women were men and women all the same—as elderly fellows, like your humble servant, who have seen and talked with rearward stragglers of that generation—now all and long marched off—can testify, if they will.

In those days Chapelizod was about the gayest and prettiest of the outpost villages in which old Dublin took a complacent pride. The poplars which stood, in military rows, here and there, just showed a glimpse of formality among the orchards and old timber that lined the banks of the river and the valley of the Liffey, with a lively sort of richness. The broad old street looked hospitable and merry, with steep roofs and many coloured hall-doors. The jolly old inn, just beyond the turnpike at the sweep of the road, leading over the buttressed bridge by the mill, was first to welcome the excursionist from Dublin, under the sign of the Phœnix. There, in the grand wainscoted back-parlour, with 'the great and good King William,' in his robe, garter, periwig, and sceptre presiding in the panel over the chimneypiece, and confronting the large projecting window, through which the river, and the daffodils, and the summer foliage looked so bright and quiet, the Aldermen of Skinner's Alley—a club of the 'true blue' dye, as old as the Jacobite wars of the previous century—the corporation of shoemakers, or of tailors, or the freemasons, or the musical clubs, loved to dine at the stately hour of five, and deliver their jokes, sentiments, songs, and wisdom, on a pleasant summer's evening. Alas! the inn is as clean gone as the guests—a dream of the shadow of smoke.

Lately, too, came down the old 'Salmon House'—so called from the blazonry of that noble fish upon its painted sign-board—at the other end of the town, that, with a couple more, wheeled out at right angles from the line of the broad street, and directly confronting the passenger from Dublin, gave to it something of the character of a square, and just left room for the high road and Martin's Row to slip between its flank and the orchard that overtopped the river wall. Well! it is gone. I blame nobody. I suppose it was quite rotten, and that the rats would soon have thrown up their lease of it; and that it was taken down, in short, chiefly, as one of the players said of 'Old Drury,' to prevent the inconvenience of its coming down of itself. Still a peevish but harmless old fellow—who hates change, and would wish things to stay as they were just a little, till his own great change comes; who haunts the places where his childhood was passed, and reverences the homeliest relics of by-gone generations—may be allowed to grumble a little at the impertinences of improving proprietors with a taste for accurate parallelograms and pale new brick....