The Hoosier Schoolmaster A Story of Backwoods Life in Indiana 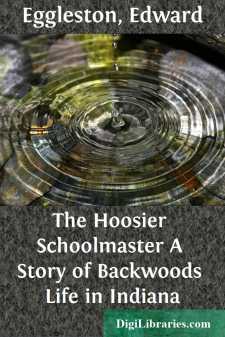 CHAPTER I A PRIVATE LESSON FROM A BULLDOG.

"Want to be a school-master, do you? You? Well, what would you do in Flat Crick deestrick, I'd like to know? Why, the boys have driv off the last two, and licked the one afore them like blazes. You might teach a summer school, when nothin' but children come. But I 'low it takes a right smart man to be school-master in Flat Crick in the winter. They'd pitch you out of doors, sonny, neck and heels, afore Christmas."

The young man, who had walked ten miles to get the school in this district, and who had been mentally reviewing his learning at every step he took, trembling lest the committee should find that he did not know enough, was not a little taken aback at this greeting from "old Jack Means," who was the first trustee that he lighted on. The impression made by these ominous remarks was emphasized by the glances which he received from Jack Means's two sons. The older one eyed him from the top of his brawny shoulders with that amiable look which a big dog turns on a little one before shaking him. Ralph Hartsook had never thought of being measured by the standard of muscle. This notion of beating education into young savages in spite of themselves dashed his ardor.

He had walked right to where Jack Means was at work shaving shingles in his own front yard. While Mr. Means was making the speech which we have set down above, and punctuating it with expectorations, a large brindle bulldog had been sniffing at Ralph's heels, and a girl in a new linsey-woolsey dress, standing by the door, had nearly giggled her head off at the delightful prospect of seeing a new school-teacher eaten up by the ferocious brute.

The disheartening words of the old man, the immense muscles of the young man who was to be his rebellious pupil, the jaws of the ugly bulldog, and the heartless giggle of the girl, gave Ralph a delightful sense of having precipitated himself into a den of wild beasts. Faint with weariness and discouragement, and shivering with fear, he sat down on a wheelbarrow.

"You, Bull!" said the old man to the dog, which was showing more and more a disposition to make a meal of the incipient pedagogue, "you, Bull! git aout, you pup!" The dog walked sullenly off, but not until he had given Ralph a look full of promise of what he meant to do when he got a good chance. Ralph wished himself back in the village of Lewisburg, whence he had come.

"You see," continued Mr. Means, spitting in a meditative sort of a way, "you see, we a'n't none of your saft sort in these diggings. It takes a man to boss this deestrick. Howsumdever, ef you think you kin trust your hide in Flat Crick school-house I ha'n't got no 'bjection. But ef you git licked, don't come on us. Flat Crick don't pay no 'nsurance, you bet! Any other trustees? Wal, yes. But as I pay the most taxes, t'others jist let me run the thing. You can begin right off a Monday. They a'n't been no other applications. You see, it takes grit to apply for this school. The last master had a black eye for a month. But, as I wuz sayin', you can jist roll up and wade in. I 'low you've got spunk, maybe, and that goes for a heap sight more'n sinnoo with boys. Walk in, and stay over Sunday with me. You'll hev' to board roun', and I guess you better begin here."

Ralph did not go in, but sat out on the wheelbarrow, watching the old man shave shingles, while the boys split the blocks and chopped wood. Bull smelled of the new-comer again in an ugly way, and got a good kick from the older son for his pains. But out of one of his red eyes the dog warned the young school-master that he should yet suffer for all kicks received on his account.

"Ef Bull once takes a holt, heaven and yarth can't make him let go," said the older son to Ralph, by way of comfort.

It was well for Ralph that he began to "board roun'" by stopping at Mr. Means's. Ralph felt that Flat Creek was what he needed. He had lived a bookish life; but here was his lesson in the art of managing people, for he who can manage the untamed and strapping youths of a winter school in Hoopole County has gone far toward learning one of the hardest of lessons. And in Ralph's time, things were worse than they are now. The older son of Mr. Means was called Bud Means. What his real name was, Ralph could not find out, for in many of these families the nickname of "Bud" given to the oldest boy, and that of "Sis," which is the birth-right of the oldest girl, completely bury the proper Christian name. Ralph saw his first strategic point, which was to capture Bud Means.

After supper, the boys began to get ready for something. Bull stuck up his ears in a dignified way, and the three or four yellow curs who were Bull's satellites yelped delightedly and discordantly.

"Bill," said Bud Means to his brother, "ax the master ef he'd like to hunt coons. I'd like to take the starch out uv the stuck-up feller."

"I don't take no sech a dare," returned Bill, and walked down to the gate, by which Ralph stood watching the stars come out, and half wishing he had never seen Flat Creek.

"I say, mister," began Bill, "mister, they's a coon what's been a eatin' our chickens lately, and we're goin' to try to ketch the varmint....