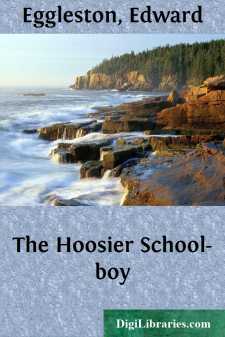 While the larger boys in the village school of Greenbank were having a game of “three old cat” before school-time, there appeared on the playground a strange boy, carrying two books, a slate, and an atlas under his arm.

He was evidently from the country, for he wore a suit of brown jeans, or woollen homespun, made up in the natural color of the “black” sheep, as we call it. He shyly sidled up to the school-house door, and looked doubtfully at the boys who were playing; watching the familiar game as though he had never seen it before.

The boys who had the “paddles” were standing on three bases, while three others stood each behind a base and tossed the ball around the triangle from one hole or base to another. The new-comer soon perceived that, if one with a paddle, or bat, struck at the ball and missed it, and the ball was caught directly, or “at the first bounce,” he gave up his bat to the one who had “caught him out.” When the ball was struck, it was called a “tick,” and when there was a tick, all the batters were obliged to run one base to the left, and then the ball thrown between a batter and the base to which he was running “crossed him out,” and obliged him to give up his “paddle” to the one who threw the ball.

“Four old cat,” “two old cat,” and “five old cat” are, as everybody knows, played in the same way, the number of bases or holes increasing with the addition of each pair of players.

It is probable that the game was once—some hundreds of years ago, maybe—called “three hole catch,” and that the name was gradually corrupted into “three hole cat,” as it is still called in the interior States, and then became changed by mistake to “three old cat.” It is, no doubt, an early form of our present game of base-ball.

It was this game which the new boy watched, trying to get an inkling of how it was played. He stood by the school-house door, and the girls who came in were obliged to pass near him. Each of them stopped to scrape her shoes, or rather the girls remembered the foot-scraper because they were curious to see the new-comer. They cast furtive glances at him, noting his new suit of brown clothes, his geography and atlas, his arithmetic, and, last of all, his face.

“There’s a new scholar,” said Peter Rose, or, as he was called, “Pewee” Rose, a stout and stocky boy of fourteen, who had just been caught out by another.

“I say, Greeny, how did you get so brown?” called out Will Riley, a rather large, loose-jointed fellow.

Of course, all the boys laughed at this. Boys will sometimes laugh at any one suffering torture, whether the victim be a persecuted cat or a persecuted boy. The new boy made no answer, but Joanna Merwin, who, just at that moment, happened to be scraping her shoes, saw that he grew red in the face with a quick flush of anger.

“Don’t stand there, Greeny, or the cows’ll eat you up!” called Riley, as he came round again to the base nearest to the school-house....