The Homeric Hymns A New Prose Translation; and Essays, Literary and Mythological 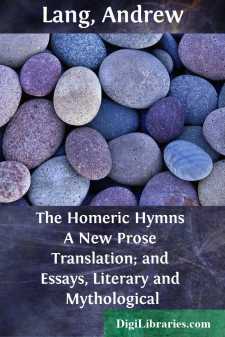 “The existing collection of the Hymns is of unknown editorship, unknown date, and unknown purpose,” says Baumeister.  Why any man should have collected the little preludes of five or six lines in length, and of purely conventional character, while he did not copy out the longer poems to which they probably served as preludes, is a mystery.  The celebrated Wolf, who opened the path which leads modern Homerologists to such an extraordinary number of divergent theories, thought rightly that the great Alexandrian critics before the Christian Era, did not recognise the Hymns as “Homeric.”  They did not employ the Hymns as illustrations of Homeric problems; though it is certain that they knew the Hymns, for one collection did exist in the third century B.C.   Diodorus and Pausanias, later, also cite “the poet in the Hymns,” “Homer in the Hymns”; and the pseudo-Herodotus ascribes the Hymns to Homer in his Life of that author.  Thucydides, in the Periclean age, regards Homer as the blind Chian minstrel who composed the Hymn to the Delian Apollo: a good proof of the relative antiquity of that piece, but not evidence, of course, that our whole collection was then regarded as Homeric.  Baumeister agrees with Wolf that the brief Hymns were recited by rhapsodists as preludes to the recitation of Homeric or other cantos.  Thus, in Hymn xxxi. 18, the poet says that he is going on to chant “the renowns of men half divine.”  Other preludes end with a prayer to the God for luck in the competition of reciters.

This, then, is the plausible explanation of most of the brief Hymns—they were preludes to epic recitations—but the question as to the long narrative Hymns with which the collection opens is different.  These were themselves rhapsodies recited at Delphi, at Delos, perhaps in Cyprus (the long Hymn to Aphrodite), in Athens (as the Hymn to Pan, who was friendly in the Persian invasion), and so forth.  That the Pisistratidæ organised Homeric recitations at Athens is certain enough, and Baumeister suspects, in xiv., xxiii., xxx., xxxi., xxxii., the hand of Onomacritus, the forger of Oracles, that strange accomplice of the Pisistratidæ.  The Hymn to Aphrodite is just such a lay as the Phæacian minstrel sang at the feast of Alcinous, in the hearing of Odysseus.  Finally Baumeister supposes our collection not to have been made by learned editors, like Aristarchus and Zenodotus, but committed confusedly from memory to papyrus by some amateur.  The conventional attribution of the Hymns to Homer, in spite of linguistic objections, and of many allusions to things unknown or unfamiliar in the Epics, is merely the result of the tendency to set down “masterless” compositions to a well-known name.  Anything of epic characteristics was allotted to the master of Epic.  In the same way an unfathered joke of Lockhart’s was attributed to Sydney Smith, and the process is constantly illustrated in daily conversation.  The word υμνος, hymn, had not originally a religious sense: it merely meant a lay.  Nobody calls the Theocritean idylls on Heracles and the Dioscuri “hymns,” but they are quite as much “hymns” (in our sense) as the “hymn” on Aphrodite, or on Hermes....