The History of Napoleon Buonaparte 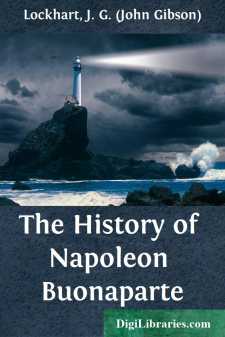 "Nations yet to come will look back upon his history as to some grand and supernatural romance. The fiery energy of his youthful career, and the magnificent progress of his irresistible ambition, have invested his character with the mysterious grandeur of some heavenly appearance; and when all the lesser tumults and lesser men of our age shall have passed away into the darkness of oblivion, history will still inscribe one mighty era with the majestic name of Napoleon."

These enthusiastic words, too, are Lockhart's, though they are not from this history, but from some "Remarks on the Periodical Criticism of England," which he published in Blackwood's Magazine. They serve, if they are taken in conjunction with his book, to mark his position in the long list of the historians, biographers and critics who have written in English, and from an English or a British point of view, upon "Napoleon the Great." Lockhart, that is to say, was neither of the idolaters, like Hazlitt, nor of the decriers and blasphemers.

One recalls at once what he said of "the lofty impartiality" with which Sir Walter Scott had written of Napoleon before him, and with which he appears to have faced his lesser task. As a biography, as a writing of history, as an example of historic style, Lockhart's comparatively modest essay must be called a better performance than Scott's. But "the real Napoleon" has not yet been painted.

Lord Rosebery, in his book on Napoleon: the Last Phase, asks if there will ever be an adequate portrait? The life is yet to be written that shall profit by all the new material that has come to light since Scott wrote his nine volumes in 1827, and Lockhart published his in 1829. But Lockhart's book has still the value of one written by a genuine man of letters, who was a born biographer, and one written while the world-commotion of Napoleon was a matter of personal report. It is tinged by some of the contemporary illusions, no doubt; but it is clearer in its record than Scott's, and while it is less picturesque, it is more direct.

His comparative brevity is a gain, since he has to tell how, in brief space, "the lean, hungry conqueror swells," as Lord Rosebery says, "into the sovereign, and then into the sovereign of sovereigns."

In view of the influence of the one book upon the other, and the one writer upon the other, it is worth note that Lockhart had a fit of enthusiasm over Scott's Napoleon when it first appeared, or rather when he first read the first six volumes of the work, before they were "out," in 1827. He thought Scott would make as great an effect by it as by any two of his novels. This proved a mistaken forecast, but Scott was paid an enormous price—some eighteen thousand pounds. When then John Murray, who had already co-opted Lockhart as his Quarterly editor, thought of inaugurating a "Family Library," and he proposed to his editor this other Napoleon book, it must have seemed in many ways a very attractive piece of work. But owing partly to Lockhart's relations with Scott, and partly to the need of avoiding any literary comparisons, these small, fat duodecimos appeared anonymously....