The History of Mr. Polly 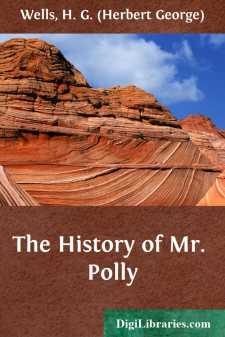 It is an illogical consequence of one human being’s ill-treatment that we should fly immediately to another, but that is the way with us. It seemed to Mr. Polly that only a human touch could assuage the smart of his humiliation. Moreover it had for some undefined reason to be a feminine touch, and the number of women in his world was limited.

He thought of the Larkins family—the Larkins whom he had not been near now for ten long days. Healing people they seemed to him now—healing, simple people. They had good hearts, and he had neglected them for a mirage. If he rode over to them he would be able to talk nonsense and laugh and forget the whirl of memories and thoughts that was spinning round and round so unendurably in his brain.

“Been seeing to business,” said the unveracious Polly.

“None of ’em ain’t at ’ome, but Miriam’s just out to do a bit of shopping. Won’t let me shop, she won’t, because I’m so keerless. She’s a wonderful manager, that girl. Minnie’s got some work at the carpet place. ’Ope it won’t make ’er ill again. She’s a loving deliket sort, is Minnie.... Come into the front parlour. It’s a bit untidy, but you got to take us as you find us. Wot you been doing to your face?”

“Bit of a scrase with the bicycle,” said Mr. Polly.

“Trying to pass a carriage on the on side, and he drew up and ran me against a wall.”

Mrs. Larkins scrutinised it. “You ought to ’ave someone look after your scrases,” she said. “That’s all red and rough. It ought to be cold-creamed. Bring your bicycle into the passage and come in.”

She “straightened up a bit,” that is to say she increased the dislocation of a number of scattered articles, put a workbasket on the top of several books, swept two or three dogs’-eared numbers of the Lady’s Own Novelist from the table into the broken armchair, and proceeded to sketch together the tea-things with various such interpolations as: “Law, if I ain’t forgot the butter!” All the while she talked of Annie’s good spirits and cleverness with her millinery, and of Minnie’s affection and Miriam’s relative love of order and management. Mr. Polly stood by the window uneasily and thought how good and sincere was the Larkins tone. It was well to be back again.

“You’re a long time finding that shop of yours,” said Mrs. Larkins.

“Don’t do to be precipitous,” said Mr. Polly.

“No,” said Mrs. Larkins, “once you got it you got it. Like choosing a ’usband. You better see you got it good. I kept Larkins ’esitating two years I did, until I felt sure of him. A ’ansom man ’e was as you can see by the looks of the girls, but ’ansom is as ’ansom does. You’d like a bit of jam to your tea, I expect? I ’ope they’ll keep their men waiting when the time comes. I tell them if they think of marrying it only shows they don’t know when they’re well off. Here’s Miriam!”

Miriam entered with several parcels in a net, and a peevish expression....